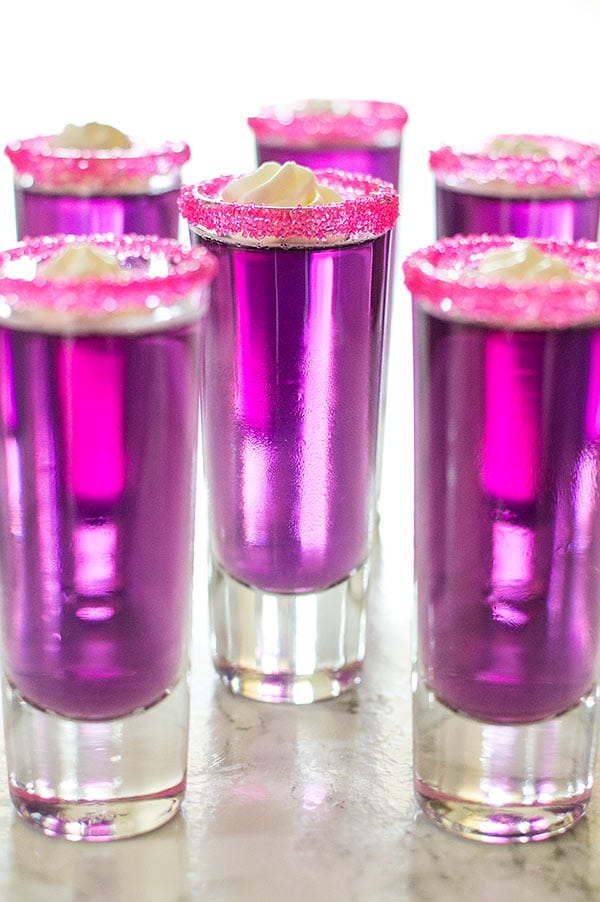 We’ve hit week two of Nerd Month and I am having SO much fun. I hope you are too!

When I told my RL people that I was doing an entire month on the blog dedicated to recipes inspired by my favorite pieces of pop culture, they were a little worried.

To quote my sister (in her most concerned voice), “Someone’s going to edit those posts for you, right?” As though I would be too overcome with fangirling to be understood and intelligibly transcribe recipes.

Okay, that might actually be a problem this week, because this week we are doing a theme within a theme (oh man, I should have planned an Inception recipe this month) and covering one of my very, very, very favorite things, Bryan Fuller shows!

If you are not familiar with Fuller’s work, he’s the mastermind behind such prematurely cancelled favorites as Wonderfalls, Pushing Daisies, and Hannibal (he’s also helming the upcoming Star Trek reboot over on CBS All Access and American Gods on Starz).

We’re starting the week off with one of his early shows, Wonderfalls. It was my first favorite show (also my first experience with cancellation) and tells the tale of Jaye, a disaffected twenty-something who suddenly begins hearing voices. Are the voices God? Are they the devil?

Who knows, but it’s a great, sweet and funny show that tells a complete 13-episode story despite its early cancellation and also features a pre-PieMakerElfKing Lee Pace.

There are a ton of recipes I could have pulled from the show, like fig pancakes or fish jello, but I finally settled on something that appears in the very first episode: 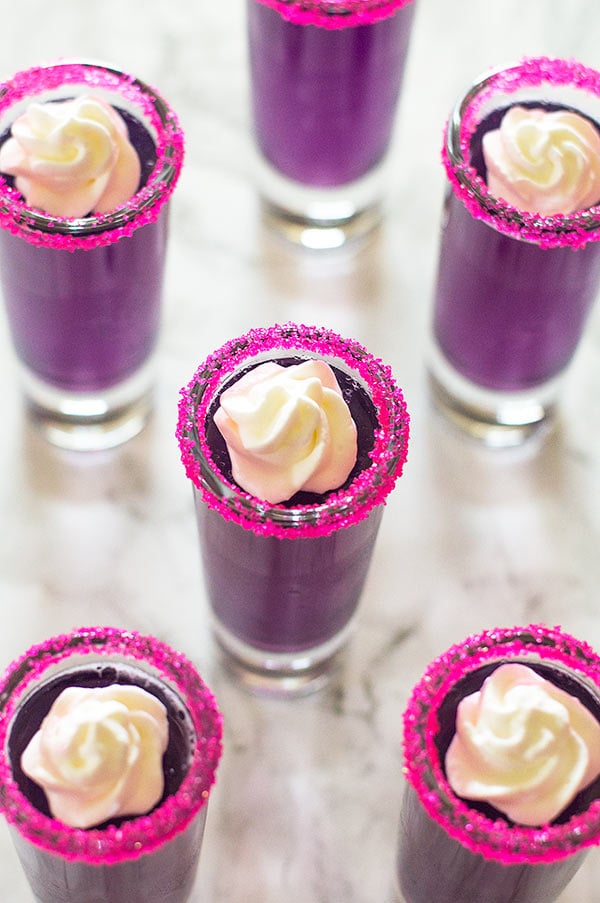 The traditional jello shot recipe is 3 ounces jello mix, 1 cup water, and 1 cup vodka. And it makes a serviceable shot.

This recipe cuts some vodka, adds some triple sec, some sprinkles, and some triple sec-infused whipped cream. So it’s a lot tastier, a lot more interesting, and way more fun to look at.

To be honest, I’m not a huge fan of traditional jello shots, but by replacing half of the vodka with triple sec, a very sweet orange-flavored liqueur, you get a candy-sweet jello shot that still packs a punch but is so good you’ll want to eat it with a spoon. (And real talk, if you serve them in 2-ounce glasses like these, it’s pretty much the only way to eat them.)

I used grape jello, because that’s the type of shot Jaye asks for in the show, but you can make these with any flavor you think would pair well with orange. 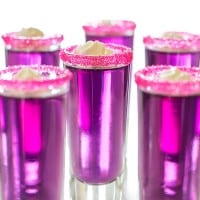 Please note, photos show 2-ounce shots. This recipe will make 9 to 10 shots of this size.
Did you make this recipe?I'd love to see it! Tag @BakingMischief or hashtag it #BakingMischief.