Insanely chocolatey Brooklyn Blackout Cupcakes made with three different types of chocolate, stuffed with a creamy chocolate pudding, and topped with sprinkles and a chocolate glaze. 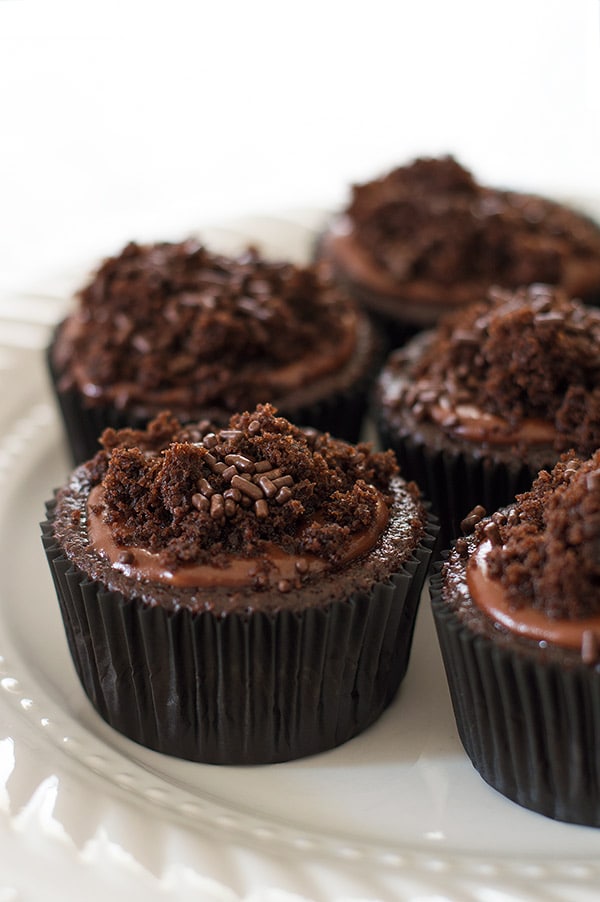 Nerd month, day three, and I have ANOTHER Captain America recipe for you (see also, my Avengers Chicken Shawarma and Civil War Parfaits for another Captain America Dessert). Another one!?, you ask. When will this madness end?

Today. It ends today, because it’s Captain America: Civil War release day!! I’m seeing the movie tomorrow, so after this is posted, I’m basically going internet silent for the next 24 hours, but if you want to chat with me about the movie, leave a comment or tweet at me. I’m sure I’ll be having all the feelings by this time tomorrow.

For me, the real heart of the Captain America series is our Brooklyn boys so when it came time to choose some Cap-themed recipes, Brooklyn Blackout Cake immediately sprang to mind.

Brooklyn Blackout Cake originated in Brooklyn from the Ebinger Baking Company, which opened its doors in 1898. But it wasn’t until around WWII that the cake got its name, so while it’s never featured in the films, it still makes me think of Captain America every time I see it.

Plus, I maybe just really wanted an excuse to make the cake for the blog, and since I prefer making cupcakes to cakes, as is my wont, I turned it into Brooklyn Blackout CUPCAKES.

Um, if you don’t LOVE chocolate, you may be excused now, because there is nothing here but chocolate. You’ve got deep, dark chocolate cake. You have chocolate pudding stuffed into that cake. Then there’s a chocolate glaze on top of that.

Pile on some chocolate cake crumbs, and then just because I never want it to be said that I am not excessive in all things, we sprinkle some chocolate sprinkles on there too. It really is one of the most decadent desserts I’ve ever made. And just in case it seems intimidating to you, these Brooklyn Blackout Cupcakes are actually pretty easy cupcakes to put together. No stand mixer is required, and the pudding is literally just heating a few ingredients together while your cupcakes bake and remembering to give it a stir occasionally.

It’s not simple, but it is easy. Honestly, the hardest part is not eating all the components separately before you get them assembled. 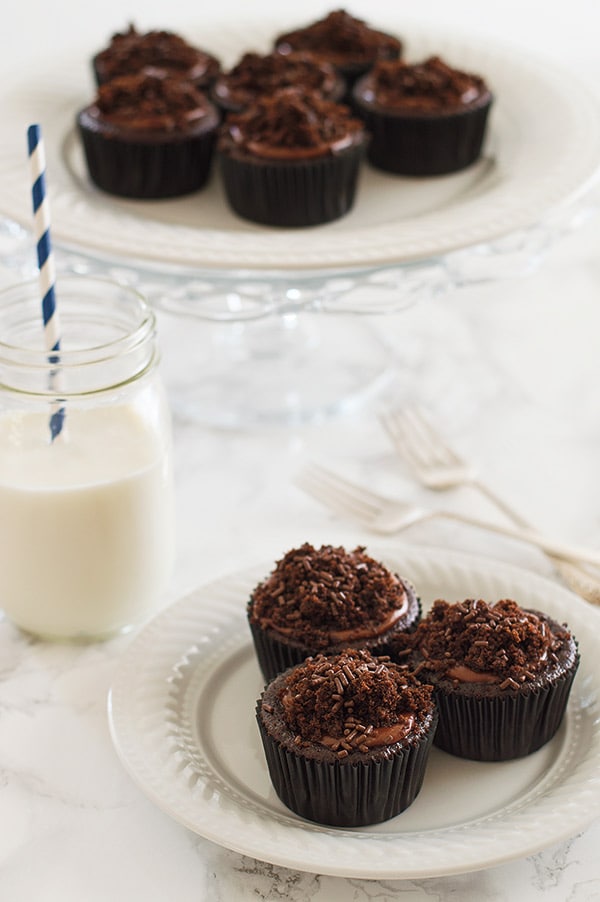 *You can use all semisweet or bittersweet chocolate if you don't keep all three of these chocolates on hand. I made a test batch with just semisweet (using good-quality chocolate chips), and the cupcakes had a sweeter, less complicated flavor but were still delicious! *Powdered sugar must be sifted or you will end up with lumps in your chocolate glaze. Cupcakes need to be stored in the refrigerator because of the pudding filling and should stay fresh for up to 3 days in an air-tight container. Small-batch Instructions: To halve this recipe, half of 3/4 cup + 2 tablespoons all-purpose flour is 1/4 cup and 3 tablespoons, 1/4 cup of sugar is 2 tablespoons, 1/3 cup of semi-sweet chocolate is 2 tablespoons, 2 teaspoons. To halve an egg yolk, separate yolk into a small bowl and measure out 9 grams or 1/2 teaspoon of yolk.
Make-ahead Instructions: You can make the pudding filling up to two days in advance, just make sure to keep it stored in an air-tight container until you are ready to use it.
Did you make this recipe?I'd love to see it! Tag @BakingMischief or hashtag it #BakingMischief.