In 2015, I shared these Pumpkin Donuts With Maple Glaze. They were one of my favorite recipes I posted that season, and I loved them so much that I wanted to revisit that pumpkin donut recipe and try something a little different.

So this time around, the donut base is still the same fabulous moist and soft pumpkiny dream of a baked donut, but instead of topping them with maple frosting, they get coated in crunchy cinnamon sugar 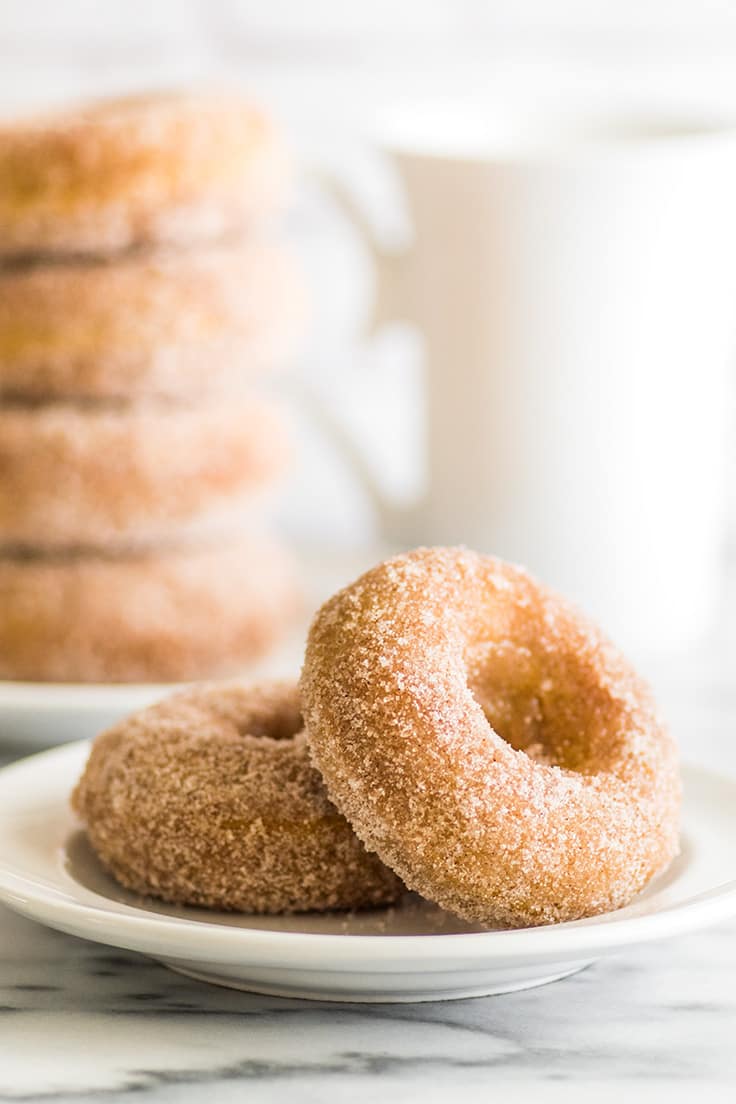 My mom was my donut taste tester for the original maple version, and she loved those. She took one bite of these cinnamon sugar donuts and was immediately like, “These are my favorite donuts you have ever made.”

So don’t just take my word for it, my mom thinks you should make them too. 😉

Baking staples: This recipe uses a handful of pantry baking staples: all-purpose flour, baking powder, salt, brown sugar, an egg, and milk.
Butter: You’re going to use butter both in the donut base and to coat the donuts after baking so the cinnamon sugar sticks. I call for unsalted butter in the recipe, but if all you have is salted, it will work fine. Just cut the added salt in the recipe by half.
Pumpkin puree: Not to be confused with pumpkin pie filling, pumpkin puree is just pure, pureed pumpkin. You can usually find it in the baking aisle near the premade pie fillings. This recipe won’t use a whole can, so check out my post on Leftover Pumpkin Puree for storage tips and recipe ideas for the leftovers.
Pumpkin pie spices: These donuts are made with cinnamon, ginger, nutmeg and ground cloves to really boost that fall pumpkin flavor. If you have premixed pumpkin pie spice, you can replace the spices with 3/4 teaspoon of pumpkin pie spice.
Cinnamon sugar: While I normally think the perfect cinnamon sugar ratio is 1 part cinnamon to 4 parts sugar, this recipe uses much less cinnamon. This is because you’re already getting a ton of cinnamon flavor from the donuts themselves and too much cinnamon in the cinnamon sugar mixture will make the coating dark and splotchy. 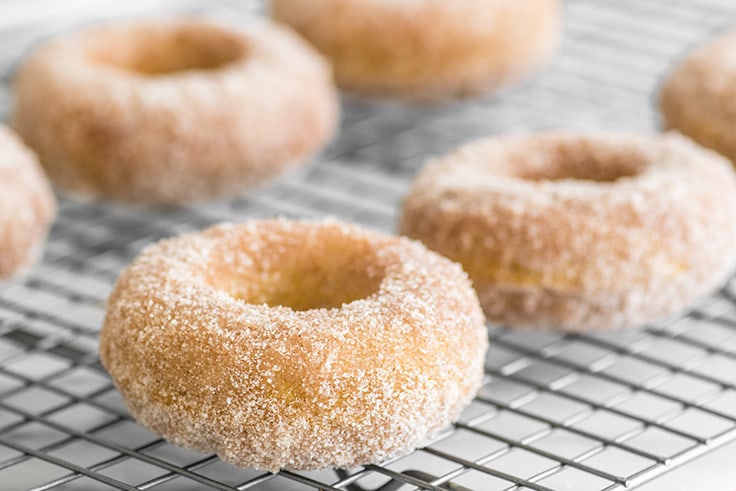 How to Make Pumpkin Donuts 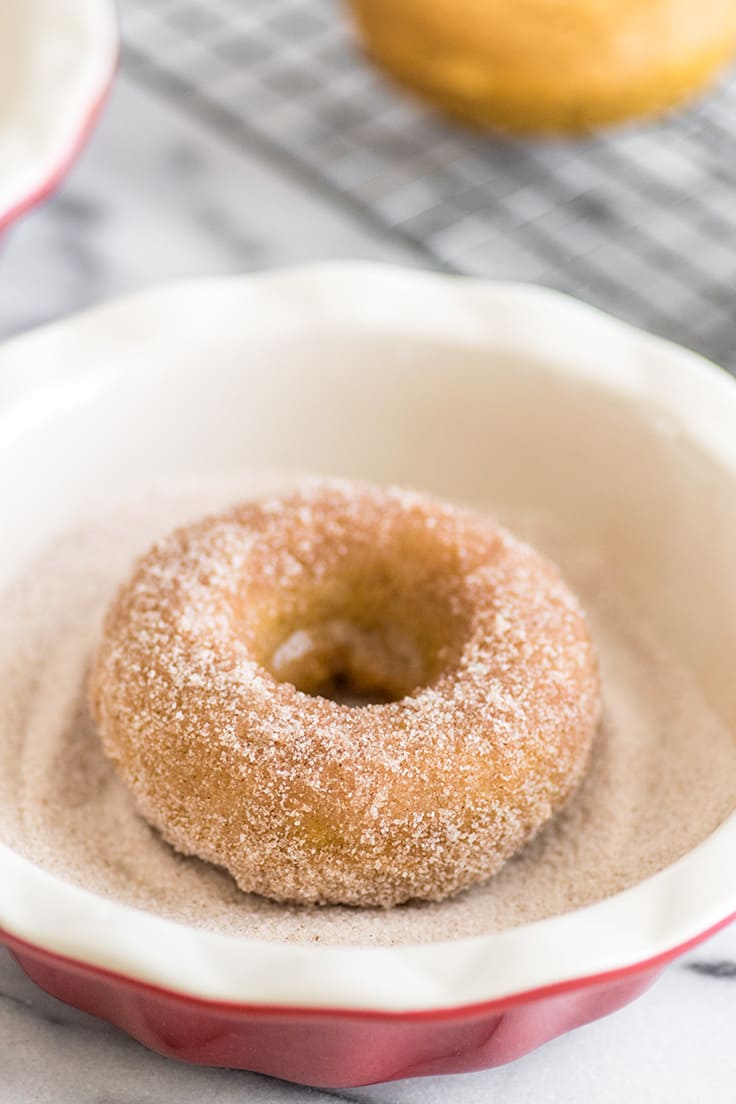 If you’d like some other topping options for your pumpkin donuts, try:

Do I need a donut pan to make these donuts?

Yes, you’ll definitely need one if you want that classic donut shape. I’m a fan of this Wilton model. I’ve owned it for years and use it for all of my donut recipes.

But can I make these without a donut pan?

If you don’t own a donut pan, you can also make donut muffins in a regular muffin pan. This will make about 6 muffins. Bake at the temperature called for in the recipe for about 14 minutes.

Can I make these into pumpkin donut holes?

Yes! This will make about 20-ish donut holes using a mini muffin pan. Bake at the temperature called for in the recipe for 7 to 10 minutes.

How to store pumpkin donuts?

Baked donuts are best on the first day, but if you’d like to store them, keep them at room temperature laid out in a single layer in an airtight container (stacked donuts will stick and pull cinnamon sugar off each other). 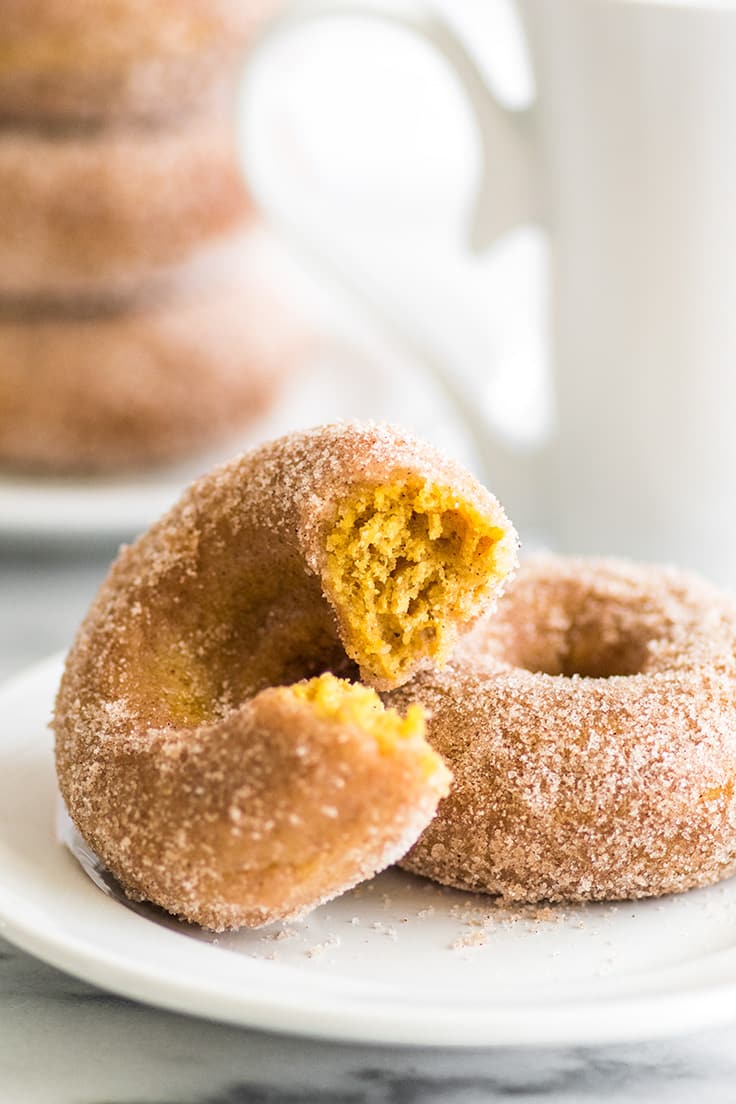 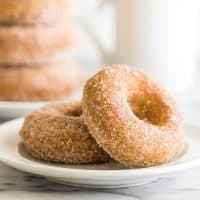 *If you have pumpkin pie spice, you can replace all the spices (not the salt) with 3/4 teaspoon of pumpkin pie spice. Bake donut holes in a mini muffin tin for 7 to 10 minutes. To make donut muffins, bake in a muffin tin for about 14 minutes.  These donuts are best on the first day. This recipe calls for about twice the amount of butter and cinnamon sugar that will actually end up on the donuts (to ensure you have enough for dipping). The approximate nutritional information reflects this.
Did you make this recipe?I'd love to see it! Tag @BakingMischief or hashtag it #BakingMischief.