You are here: Home / Breakfast / The Best Cinnamon Toast
7Kshares

Here’s how to make the best cinnamon toast ever.

A few months ago, I saw a restaurant photo on Instagram of a slice of cinnamon toast with the most gorgeous caramelized layer of cinnamon sugar over the top, and I immediately set about trying and recreate it at home.

After a bit of trial and error, friend, I’d like to introduce you to the best cinnamon toast I’ve ever eaten. 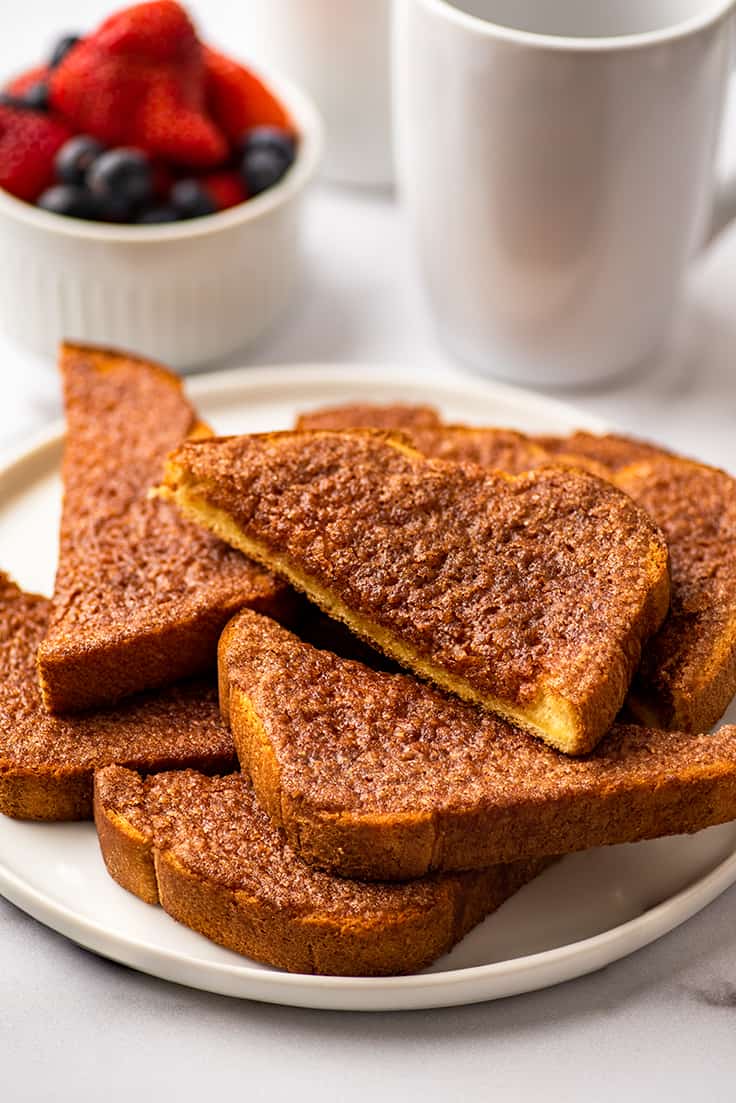 Why is this toast so good?

The classic cinnamon sugar toast a lot of us grew up with is toasted bread, topped with butter, sprinkled with cinnamon sugar, and done. And it’s completely delicious.

Instead of adding cinnamon sugar to the bread after cooking, this method uses a paste of butter and cinnamon sugar over uncooked bread which is then baked in the oven and broiled.

Cooking the cinnamon sugar mixture onto the toast creates a fantastic caramelized crust over the bread while the butter seeps down into it so you get this absolutely irresistible crispy, sweet, and buttery combo when you take a bite.

I found variations of this recipe around the internet, but I believe the cooking method was popularized by the Pioneer Woman. Her recipe uses two sticks of butter and an entire loaf of bread though, so today I’m sharing a scaled-down cinnamon sugar toast recipe with you.

How to Make Cinnamon Toast

This is a quick overview of how to make cinnamon toast in the oven with extra tips and tricks. For the full printable recipe, scroll down to the recipe card below.

1. Combine together softened butter, sugar, cinnamon, and vanilla. Use a fork to stir until the mixture forms a paste that is uniform in color. 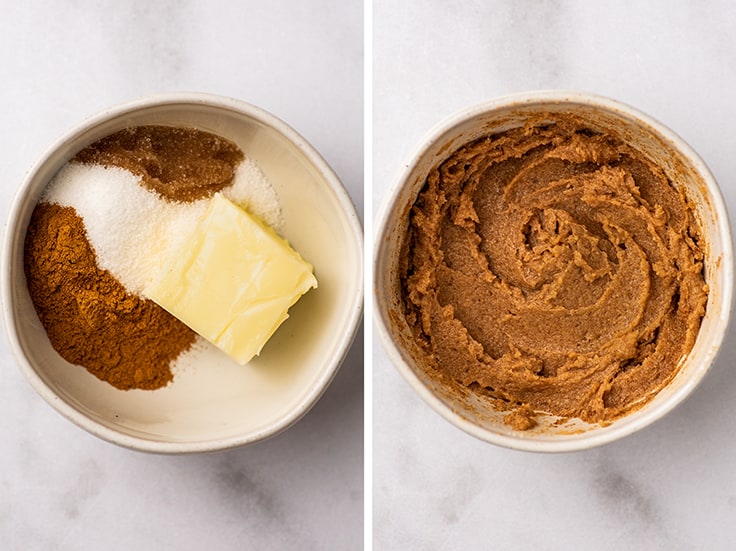 2. Divide the cinnamon butter mixture evenly between the pieces of bread and spread it over the slices from edge to edge. Place the slices on an ungreased, unlined baking sheet. (Don’t use parchment paper or a silicone baking mat because they can’t be used under the broiler.) 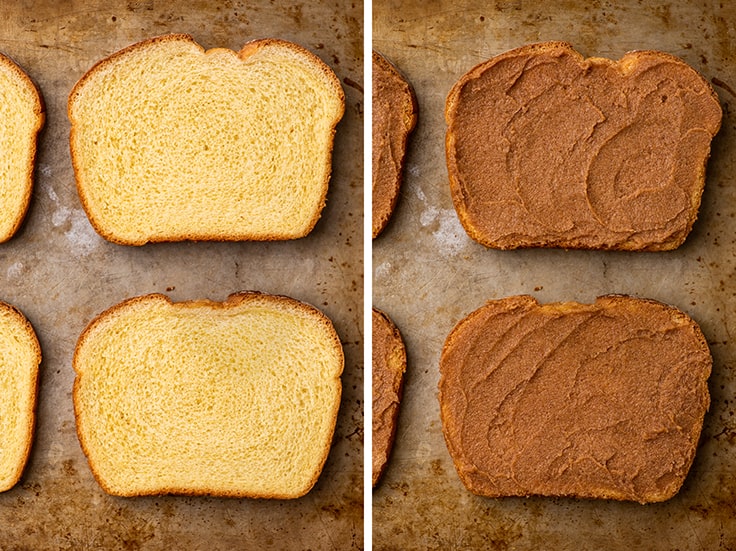 3. Place the baking sheet on the top or center rack of your oven (you want it in the top half of your oven, but at least 5 inches from the broiler so your bread doesn’t burn).

4. Bake for 10 minutes and then switch your broiler on high and toast for 1 to 2 minutes, until top is bubbly and toast is fully crispy. DO NOT walk away from your toast under the broiler, as it can start to burn in seconds. 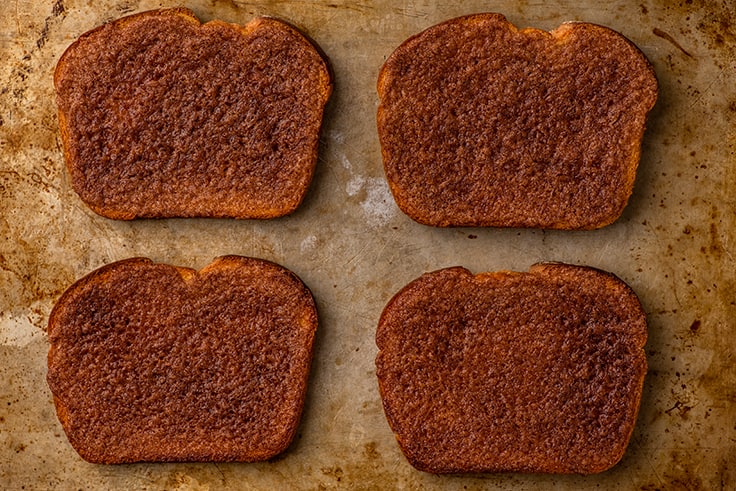 5. Allow the toast to cool slightly, slice, and enjoy! 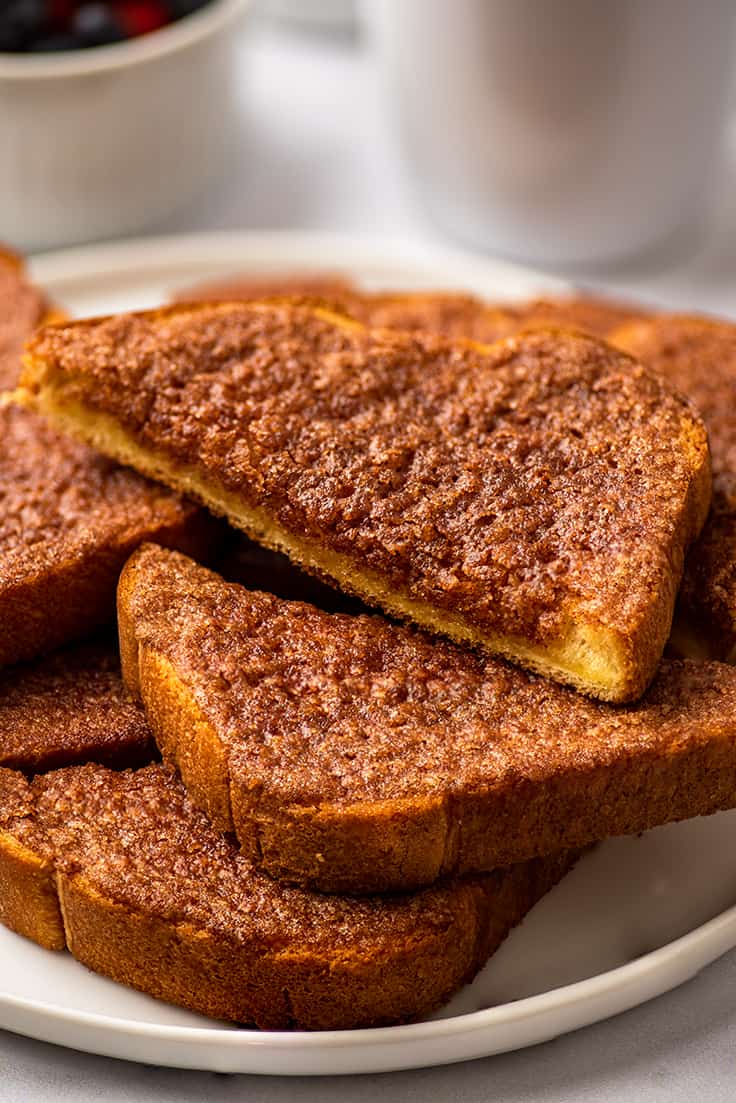 How can I soften my butter more quickly?

If you’re in a hurry, you can quickly soften your butter by cutting it into quarters and microwaving it in 4 to 5-second intervals until it softens slightly but does not become melty. Once it’s soft enough to smash with a fork, it’s good to go.

Can I make this without using my broiler?

If you can’t/don’t want to use your broiler, you can skip the final broiling step, the sugar just won’t be quite as caramelized.

Simply make the recipe according to the instructions and bake the bread an additional minute or two until it reaches your desired level of crispiness (since you can’t judge by color, squeeze the slices to check to see how toasted they are getting).

Can I make cinnamon toast without using the oven?

Yes and no. If you don’t have access to an oven, you can make fantastic classic cinnamon toast without one, but you can’t make *this* cinnamon toast.

To make classic cinnamon toast, use the same ingredient amounts but toast your bread in a toaster and generously butter each piece of bread. Mix sugar and cinnamon together to make cinnamon sugar and sprinkle it over the top of your buttered toast. 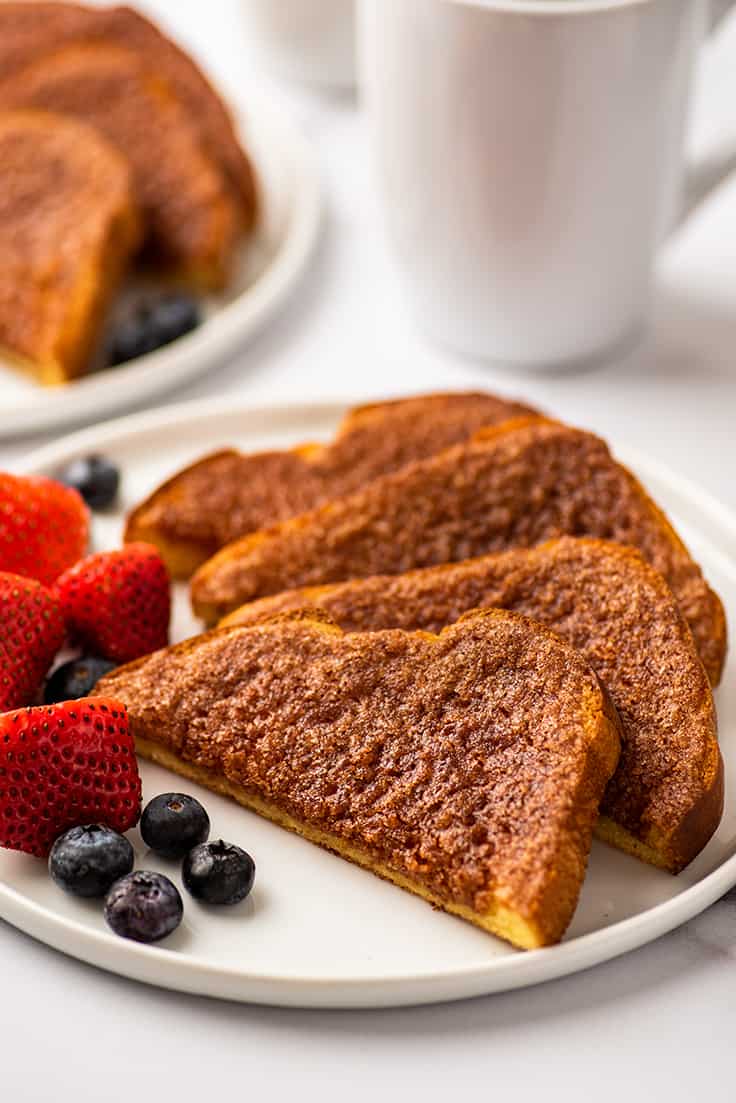 Can I freeze cinnamon toast?

I don’t recommend baking the toast ahead of time and freezing it, but you can freeze the toast before baking so it’s ready to go right into the oven on busy mornings.

To prep the toast for freezing, make the recipe as instructed and once the bread is spread with the cinnamon butter mixture, place it on a plate or baking sheet that will fit in your freezer and freeze about 20 minutes, until the top is mostly frozen (if the top is frozen, it won’t stick to other things when stacked for freezing).

Place slices of parchment paper between the slices and freeze in a freezer bag for up to 2 months. When you’re ready to cook your toast, preheat the oven to 350°F and bake frozen toast on a baking sheet for 10 to 12 minutes or until toasted. Broil for an additional 1 to 2 minutes and enjoy! 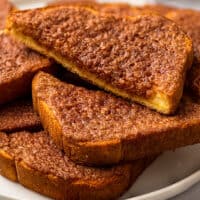 *If using unsalted butter, add 1/8 teaspoon table salt along with the sugar and cinnamon. *Most sliced sandwich breads will work just fine here. Hearty wheat bread is particularly good.
Did you make this recipe?I'd love to see it! Tag @BakingMischief or hashtag it #BakingMischief.

Recipe Adapted From The Pioneer Woman