Hungarian goulash is the ultimate stick-to-your-bones comfort food. Beef chuck simmered with onions and tomatoes until tender and mixed with sour cream for an ultra-creamy and rich stew you can serve over noodles, potatoes, or spaetzle.

Now that we’ve reached comfort food season, I’m so excited to share this goulash recipe with you.

If your standard comfort food rotation is starting to feel a little stale, please, please, please try making Hungarian goulash this weekend. The flavors in this stew feel interesting and fresh, but utterly satisfying and warming.

It makes excellent leftovers and freezes exceptionally well, so even if you’re cooking for one or two, just make a full batch and freeze the extras for later. You’ll be so glad you did. 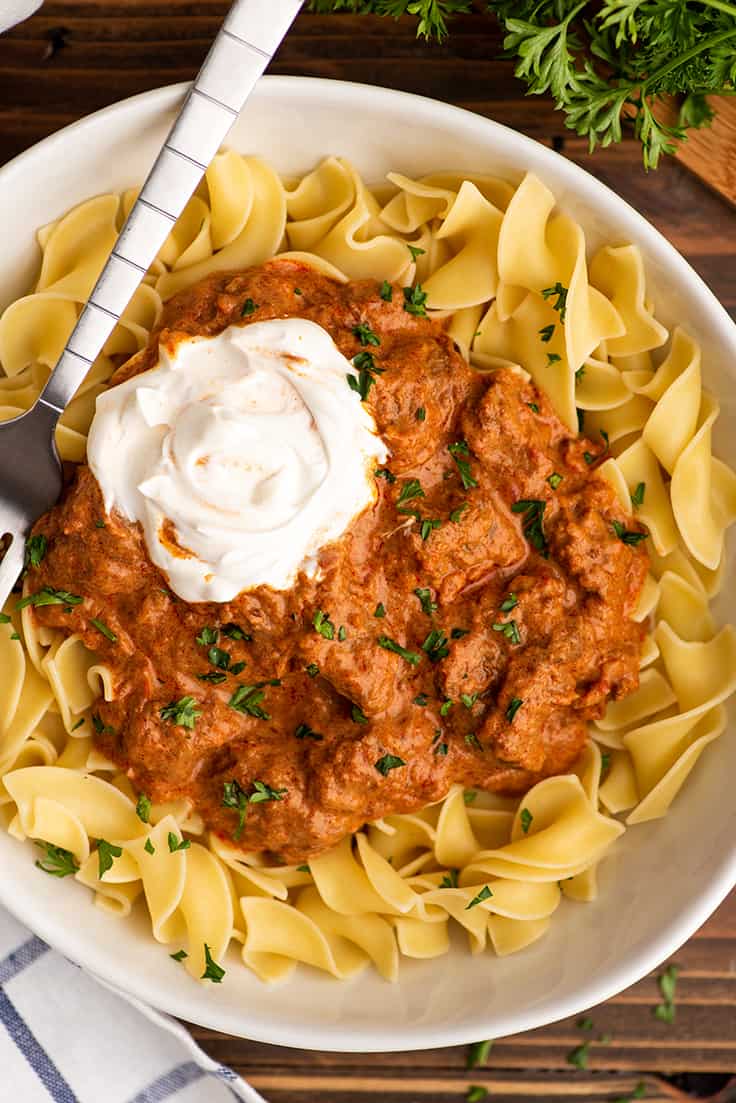 What is Hungarian goulash?

Hungarian goulash is a simple beef stew spiced with paprika and made by simmering together beef, onions, and sometimes tomatoes, potatoes, and peppers.

Its roots can be traced back to 9th century Hungarian herdsmen, but the stew as we know it today was developed in the late 18th century when people began adding dried and crushed red peppers (paprika).

It was brought to the US in the mid 1800’s by Hungarian immigrants and became so popular that in 1969, it was polled as one of the 5 most popular meat dishes in the United States. 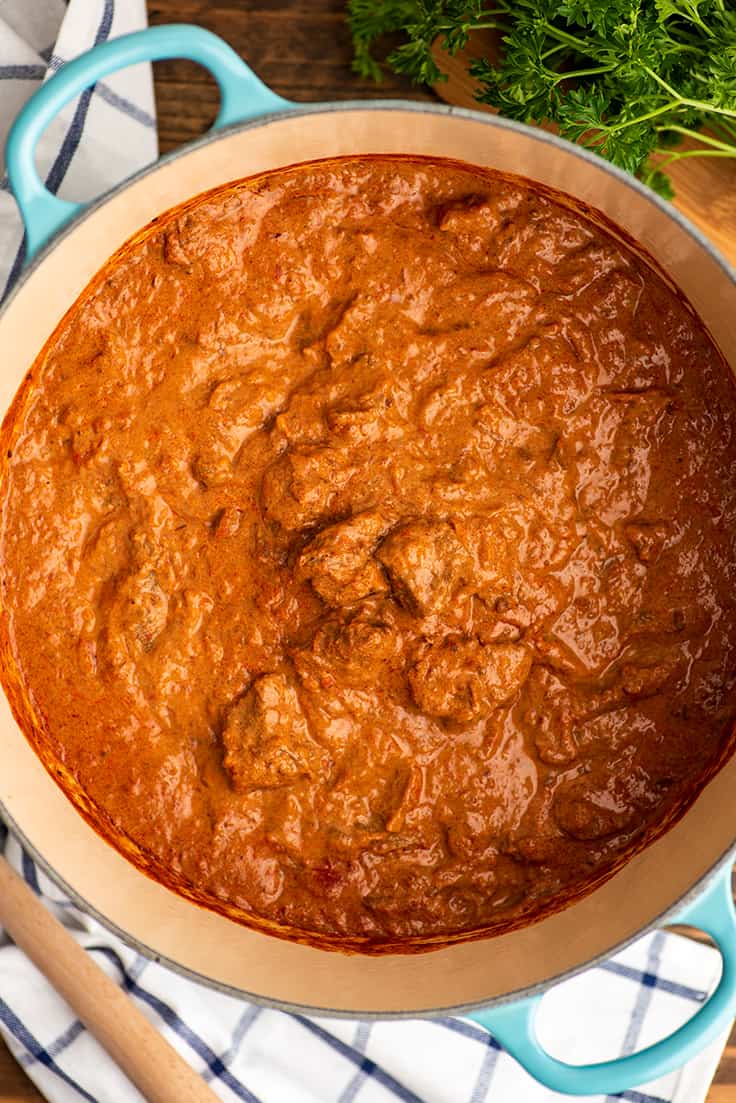 A Note on Caraway Seeds: Caraway seeds are quite large, and some people find their texture in foods unpleasant. You can use them whole, but I recommend crushing them with a mortar and pestle or using a sharp knife to roughly chop them. The knife method is a little messy but works just fine with a little patience.

How to Make Hungarian Goulash 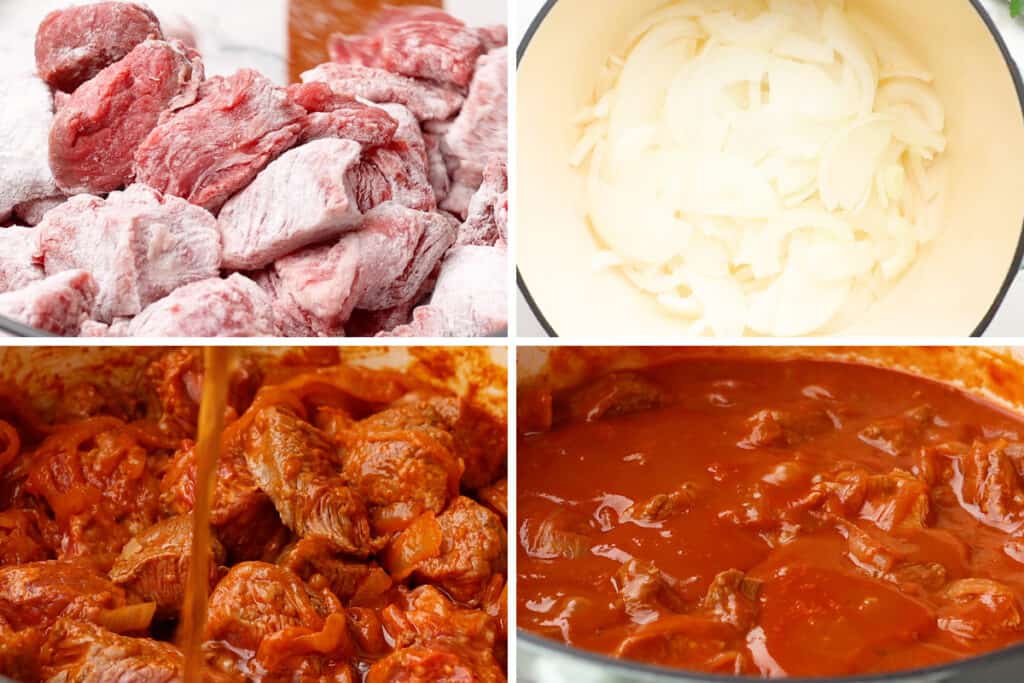 1. Trim your chuck roast of fat and silver skin (the thin, silvery membrane that sticks tightly to the meat) and cut it into small chunks. This will probably take longer than you expect, so give yourself plenty of prep time. Toss the beef with flour and set aside.

2. In a large Dutch oven or pot melt the butter and add onions. Let them cook for 10 minutes, until wilted, before adding the spices. Toasting the spices before adding in the rest of the ingredients will help bring out as much of their flavor as possible.

3. Add the beef to the pan and toss to coat, before adding the broth and tomatoes. Make sure to scrape the bottom of the pot to dislodge any cooked on bits so they don’t burn during the long simmer ahead.

4. Cook the goulash until the meat is tender, about 2 to 2 ½ hours before stirring in the lemon juice. 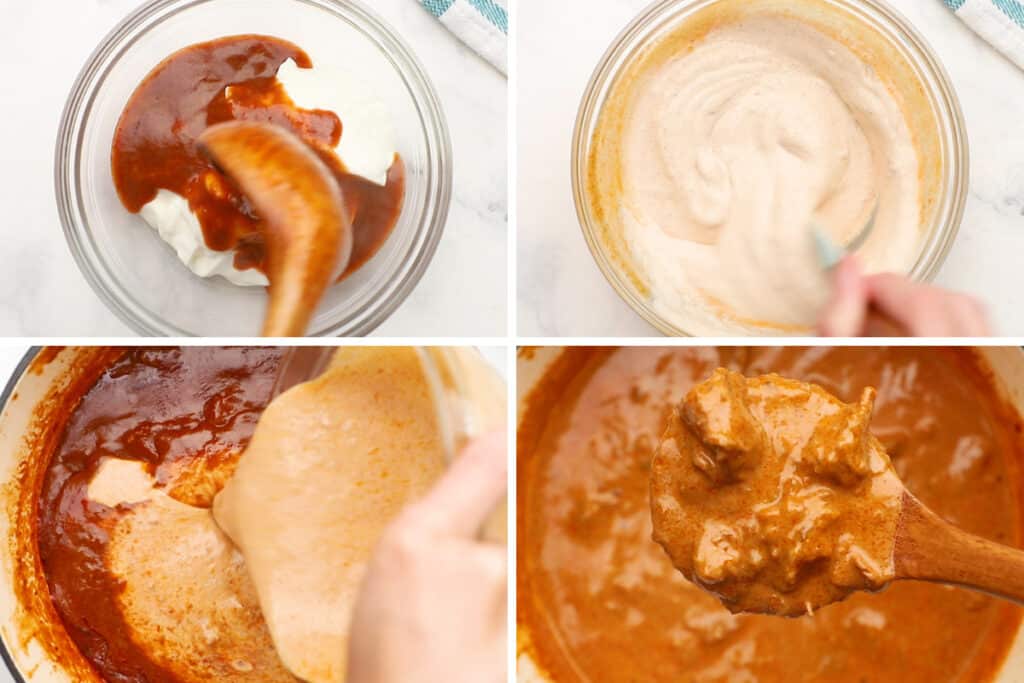 5. Temper the sour cream before adding it into the goulash by stirring small ladlefuls of the hot cooking liquid into the cream one at a time until the cream is warm to the touch.

6. Stir the warm sour cream into the stew and add salt and pepper to taste.

7. Serve over noodles, potatoes, or spaetzle, and enjoy!

A Note on Tempering Sour Cream: Tempering the sour cream raises its temperature so that you’re not adding cold cream to a simmering liquid. Using cold sour cream can cause it to break when in hits the sauce and look lumpy. The tempering step is optional, but creates a more aesthetically pleasing stew. 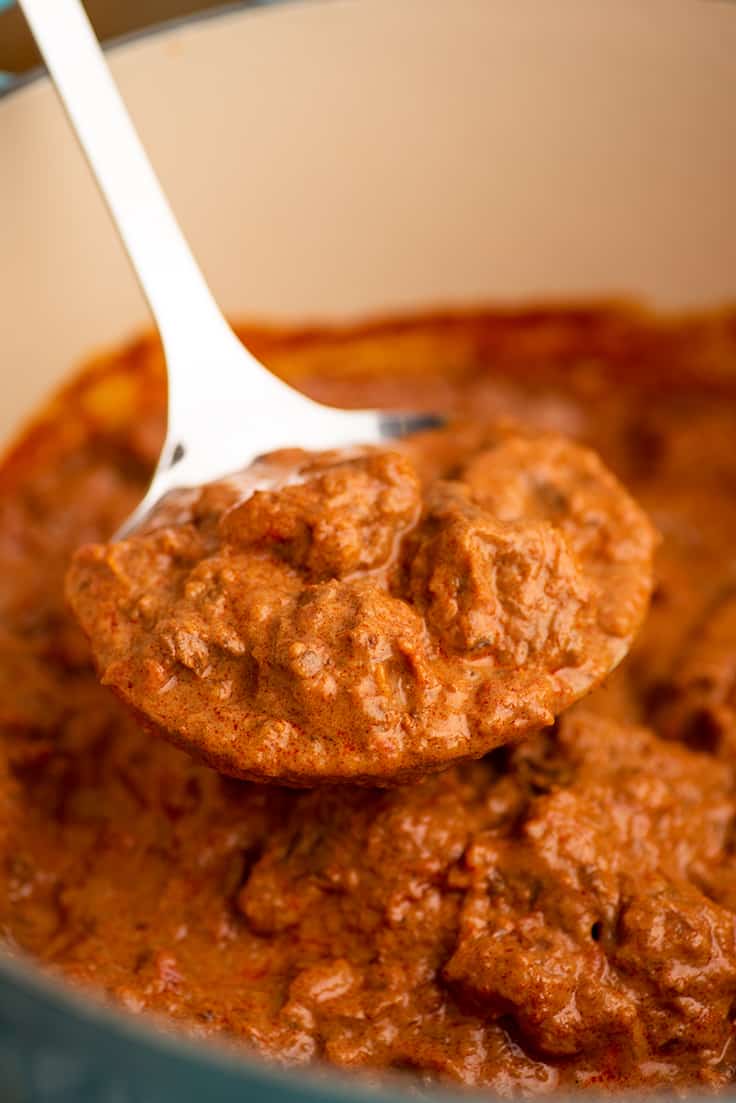 What is the difference between American and Hungarian goulash?

Can you freeze goulash?

Yes! Goulash freezes extremely well (do not freeze pasta or potatoes with the goulash). Freeze all together or in individual portions in freezer bags and defrost in the refrigerator.

You can reheat defrosted goulash very gently over medium heat on the stove or in the microwave.

How to store goulash?

Store goulash in an airtight container in the fridge for up to three days. If storing with pasta, make sure to mix in the pasta well before storing so it doesn’t dry out.

What to serve with Hungarian beef goulash?

Serve the goulash over egg noodles, potatoes (boiled, mashed, or baked all work), or spaetzle.

Since this dish is so rich, serve it alongside simple veggie sides like roasted broccoli or asparagus. 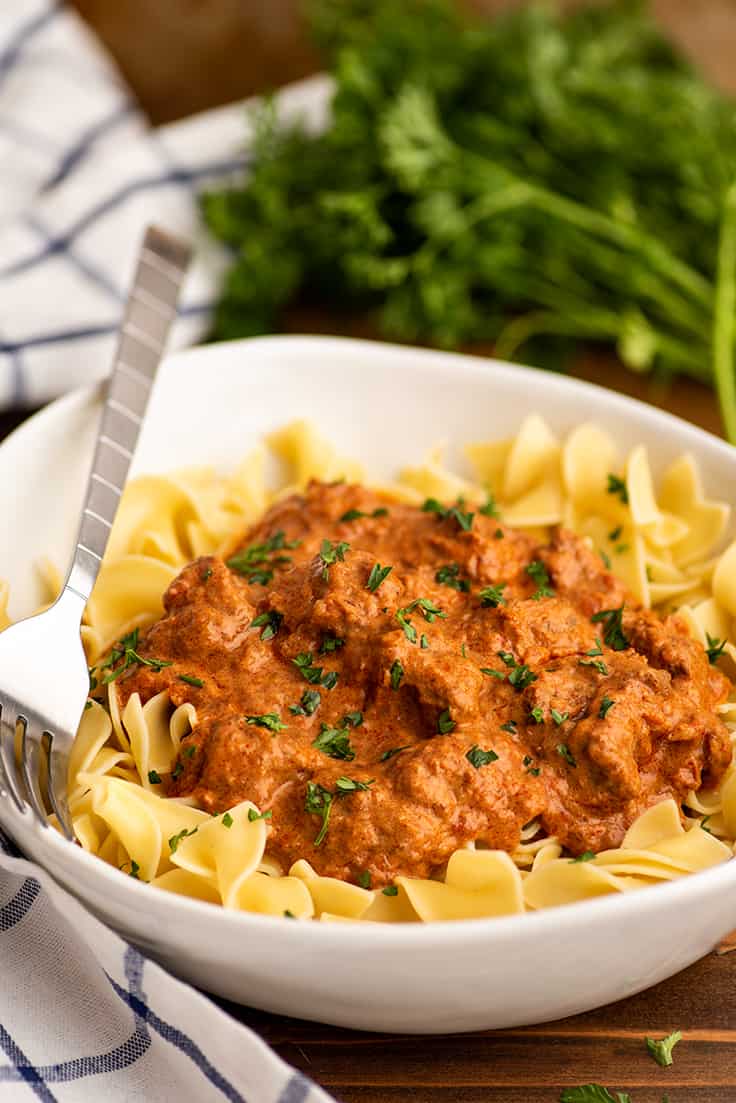 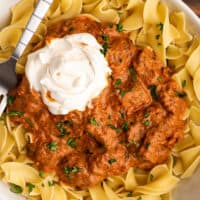 *If using pre-trimmed and cut chuck stewing meat or boneless short ribs (NOT bone-in), use 1½ to 2 pounds of meat.  *You can use the seeds whole, but I recommend crushing them with a mortar and pestle or using a sharp knife to roughly chop them. The knife method is a little messy but works just fine with a little patience. Approximate nutritional information is for 6 servings.
Did you make this recipe?I'd love to see it! Tag @BakingMischief or hashtag it #BakingMischief.