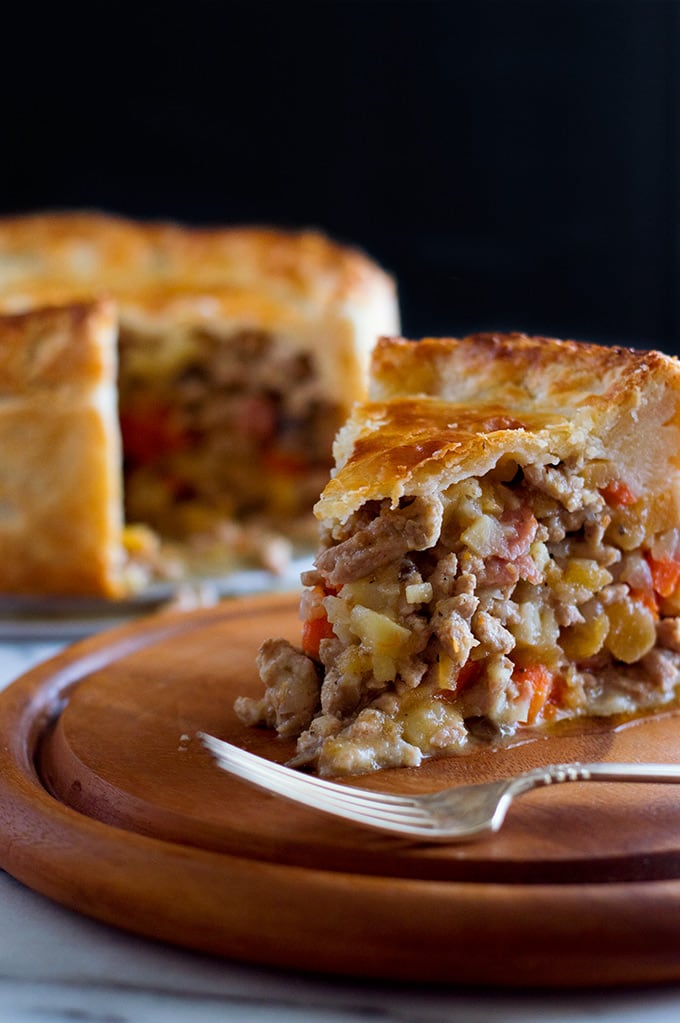 Have you been following my Creepy Recipes From Fiction series this month? So far I’ve posted Sanguinaccio Dolce from Hannibal, Spectre Apple Pie (Cupcakes) from Big Fish, and Crimson Peak-inspired Red Velvet Lava Cakes. For the final recipe, I figured I’d go big: Frey Pie from Game of Thrones!

One of the more memorable scenes from Game of Thrones last season was when we finally saw Arya in full-blown assassin mode, getting her Stark revenge on the house that murdered her family by feeding Walder Frey a savory pie made from his own sons.

Watching that old man lift up the top of a meat pie and find a finger inside was a pretty satisfying moment.

I really wanted to make this pie right after that episode aired, but I had just posted a Hannibal recipe for Lomo Saltado and figured that one cannibal recipe was probably enough for a young food blog.

Fast forward a few months, and I still haven’t seen a Frey Pie recipe pop up, there are now two Hannibal recipes on the blog, and I’ve just accepted that Baking Mischief will have a higher-than-average number of cannibal recipes (¯\_(ツ)_/¯). So here we go. 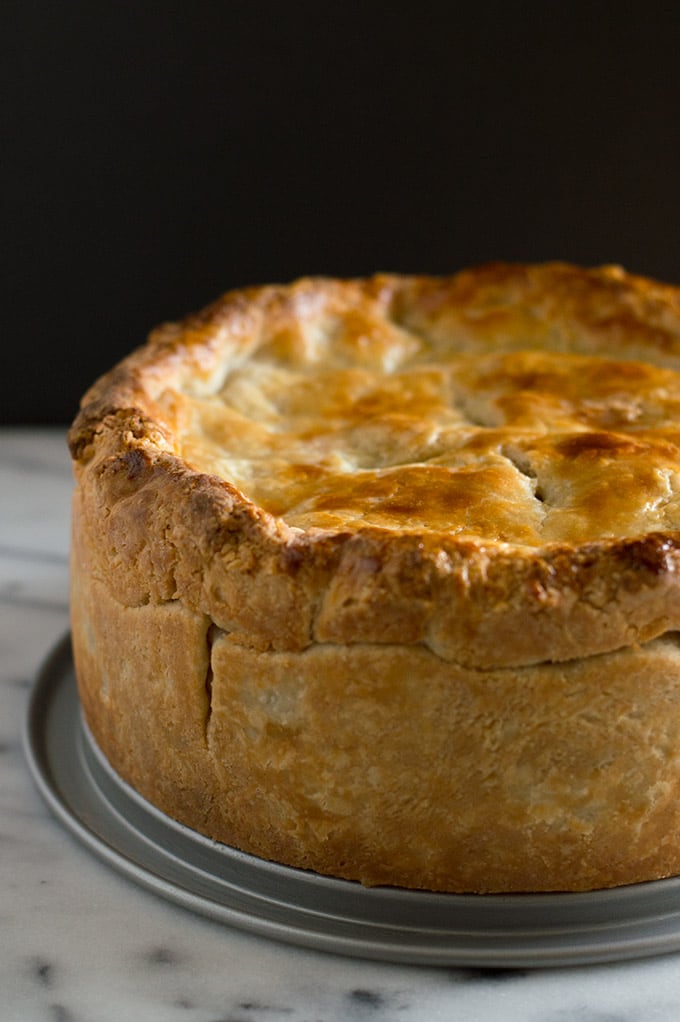 Arya’s Frey Pie doesn’t actually exist in the novels, so I didn’t have an official description to base this recipe off of. The Arya/Frey pie story line is cribbed from another character in the books, Lord Manderly (the awesome Inn at the Crossroads has actually made his pie).

But the description of his pies,”…flaky crusts stuffed to bursting with carrots, onions, turnips, parsnips, mushrooms, and chunks of seasoned pork swimming in a savory brown gravy…” doesn’t quite jibe with the pie we see in the episode, which clearly uses minced, not chunked Frey. 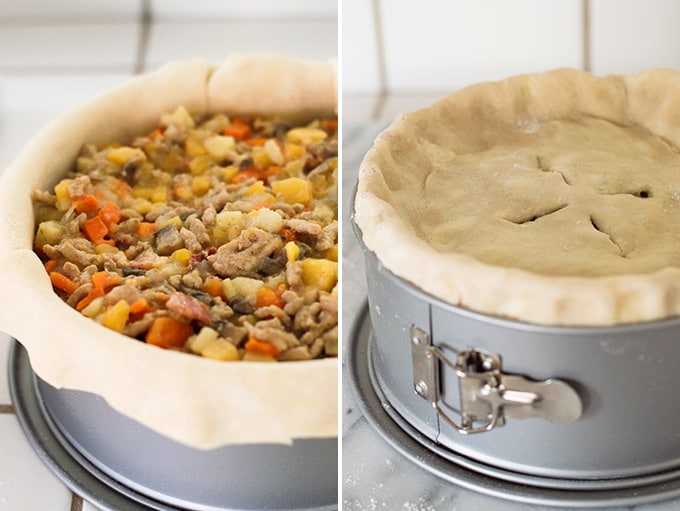 So this pie is a blend of the two, a flaky pie crust stuffed full of carrots, onions, turnips, parsnips, mushrooms, and made with ground pork. I also added bacon for flavoring since ground pork can be a bit bland. The result is a pie that looks pretty darn close to the show pie (minus a Frey finger) and one that is suuuuuuper tasty.

Seriously, this thing is so good, it might actually work its way into my regular winter rotation. We’ll just not tell people where the recipe inspiration came from. Kay? 🙂 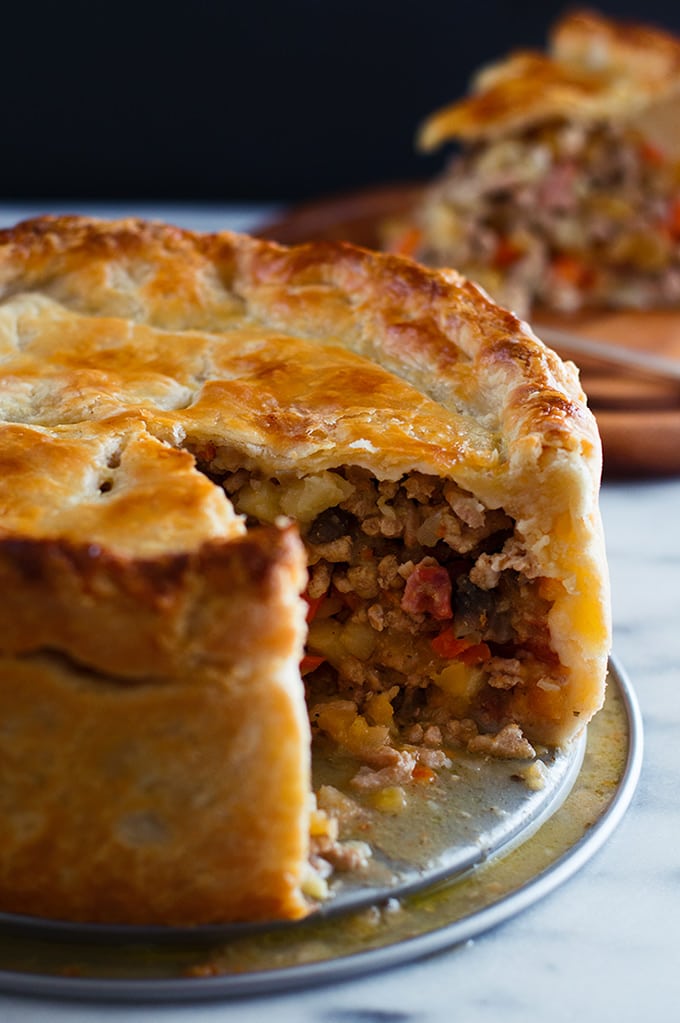 Novice bakers, deep-dish pies can be a little challenging because you have to roll out and work with a huge piece of dough. I’ve included some extra dough tips below the recipe. 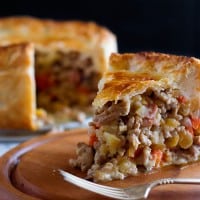 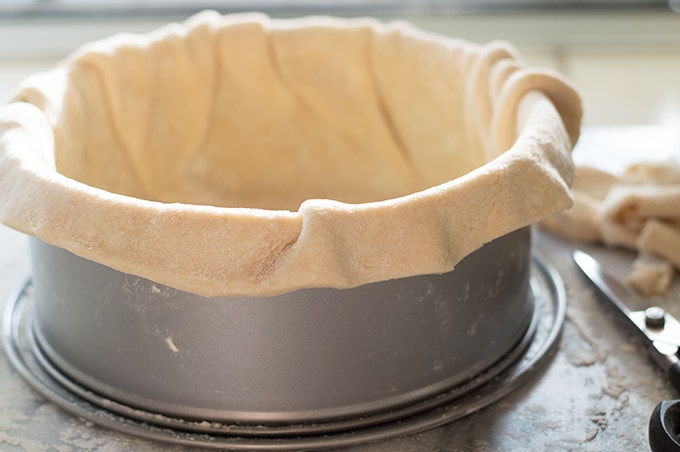 *Links marked with an asterisk are affiliate links, which means I receive small commission if you make a purchase using them. There is absolutely no additional cost to you.
« Milk Tea With Coffee Jelly
Easy Baked Chicken Parmesan for Two »