Whipped cream is one of those things you don’t really need a recipe for. You get some cream, add some sugar, and agitate the mixture until it resembles something that usually comes out of a spray can.

But it’s nice to have a starting point, especially if you’re like me and can never remember the ideal ratios, so let’s have a little chat about homemade whipped cream. 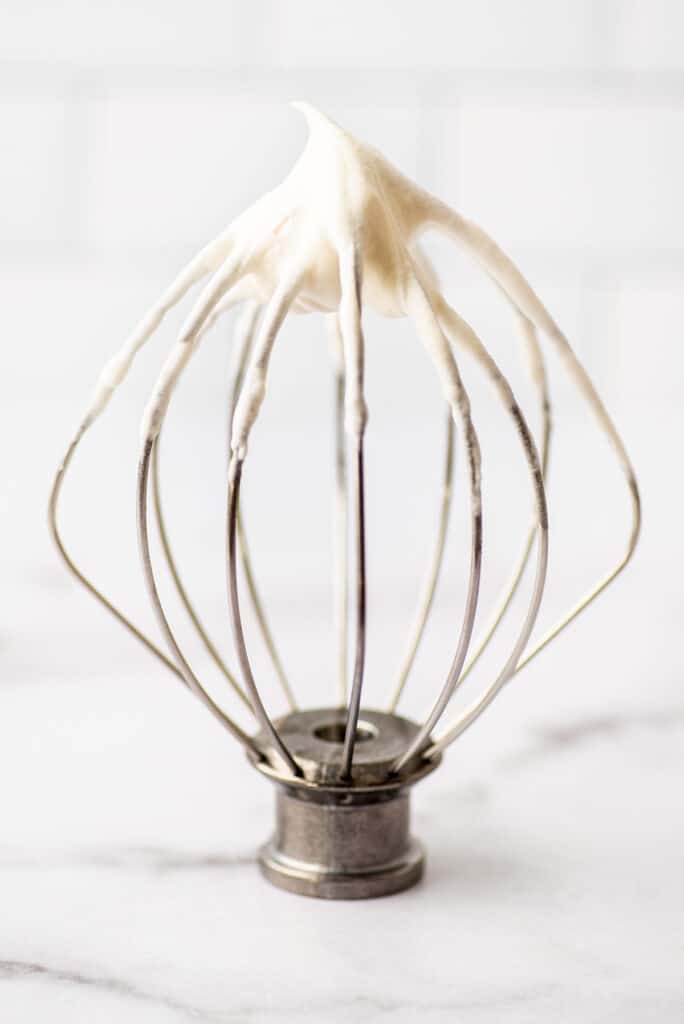 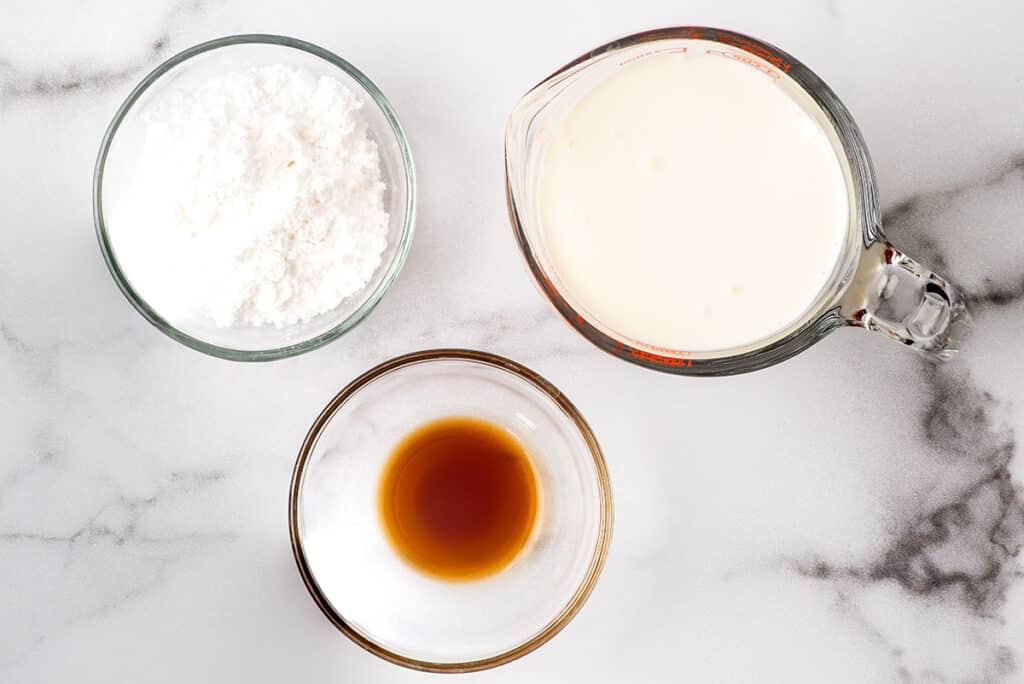 How to Make Whipped Cream (3 Ways)

There are three main ways to make whipped cream at home, using a stand mixer, a bowl and whisk (or handheld mixer), or using a mason jar, and while your tools may vary, the method is pretty much the same for all of them. 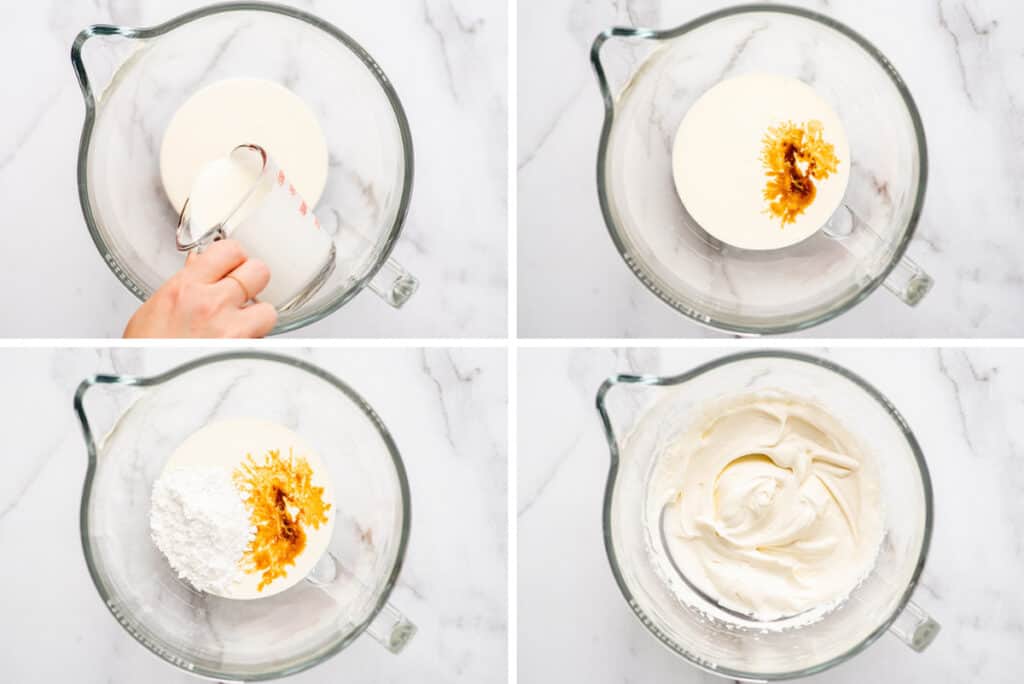 1. Combine all your ingredients in a bowl (or jar).

2. Vigorously mix ingredients until the whipped cream reaches your desired consistency. This could take as little as 2 minutes for a small amount of cream in your stand mixer or up to 15 minutes using the mason jar method. 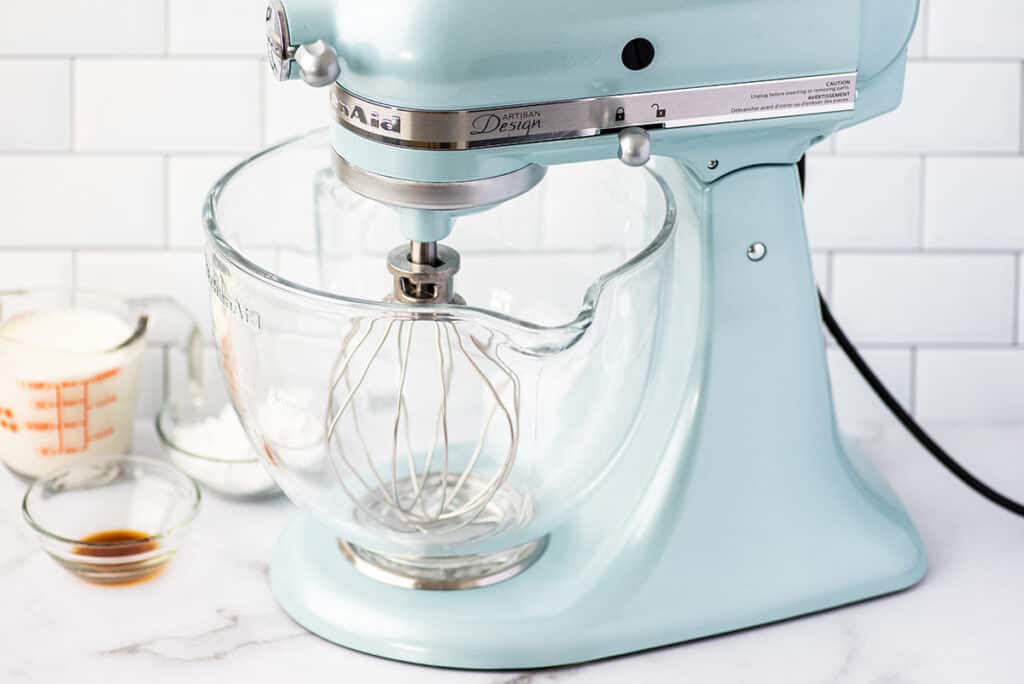 This is my favorite method, especially if I’m whipping a large amount of cream.

Making Whipped Cream With a Bowl and Whisk (or Handheld Mixer) 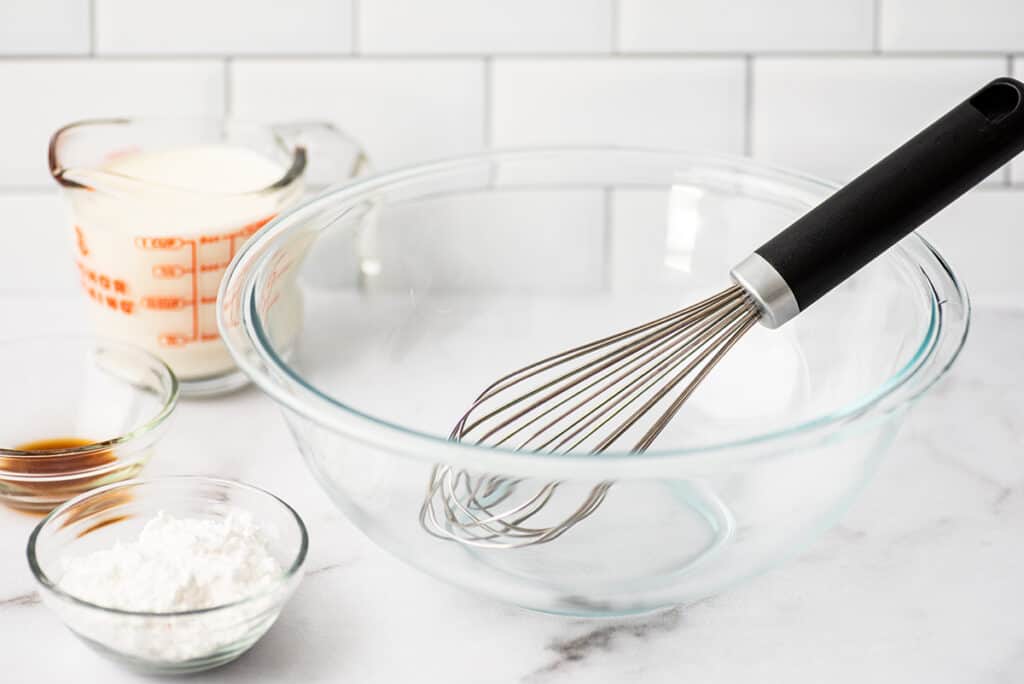 Because I make so many small-batch recipes, this is actually the method I use most often since it works well with almost any amount of cream. 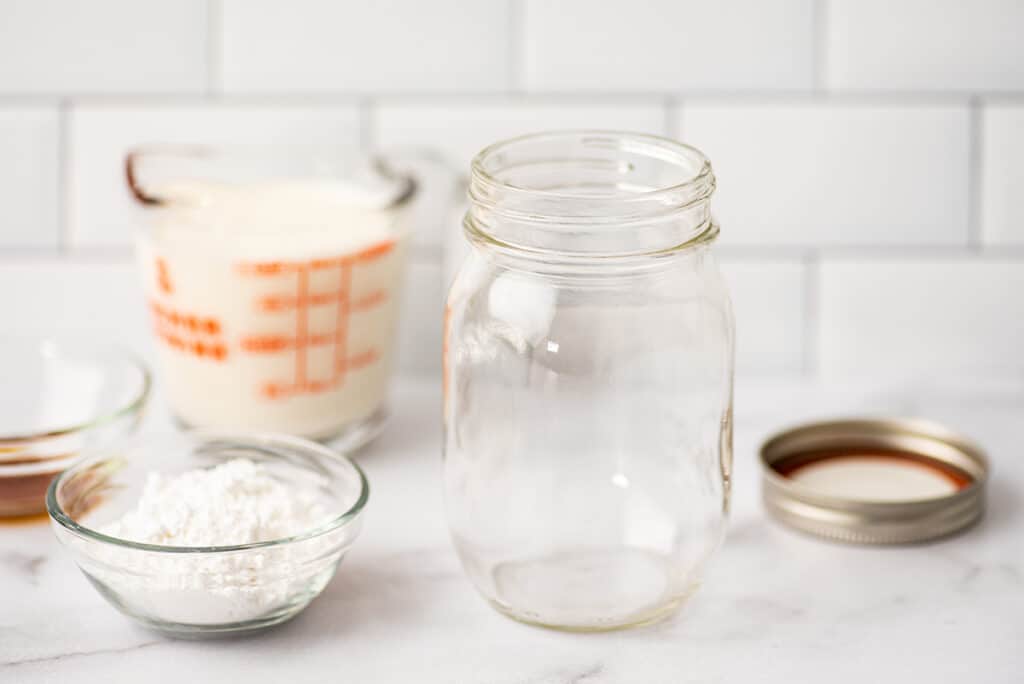 The mason jar method, where you put heavy cream in a jar, seal it, and then shake to whip it, technically works, but it’s definitely my least favorite of the bunch, and I only recommend it under pretty specific circumstances.

Customize your whipped cream with the following modifications (all mix-in measurements are for the full batch of whipped cream using 1 cup of heavy cream). 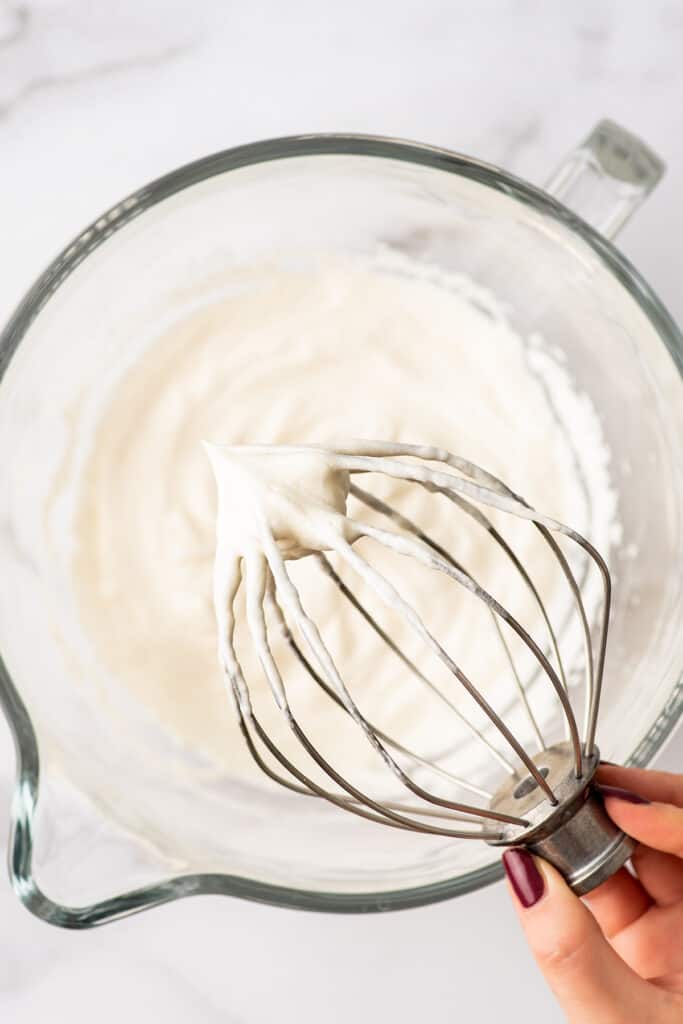 How much whipped cream will this make?

A good rule of thumb is that whipping cream will double its volume. So whipping 1 cup of heavy cream will make (about) 2 cups of whipped cream.

Can you make whipped cream with half and half?

No. Cream must contain at least 30% milk fat to whip. Half and half, which contains 10.5–18% milk fat will not whip into whipped cream no matter how long you work at it.

Can you freeze leftover whipped cream?

Yes (but…). Whipped cream freezes pretty well. I like to freeze leftovers to use in my hot chocolate or for topping quick desserts, but I wouldn’t make whipped cream just to freeze it because it can separate and begin to deflate after being frozen and thawed.

It’s also prone to picking up an “off” taste from the freezer, so you want to use it fairly quickly, within a couple of weeks.

When you’re ready to use the whipped cream, you can add it frozen straight to warm drinks or allow it to sit at room temperature for 15 to 20 minutes to thaw.

Absolutely. To change the recipe yield, hover over the serving size in the recipe card below or click if you’re on mobile, and slide the slider.

Doubling note: If doubling the recipe and using the mason jar method, you’ll need to size up to a quart-size mason jar. 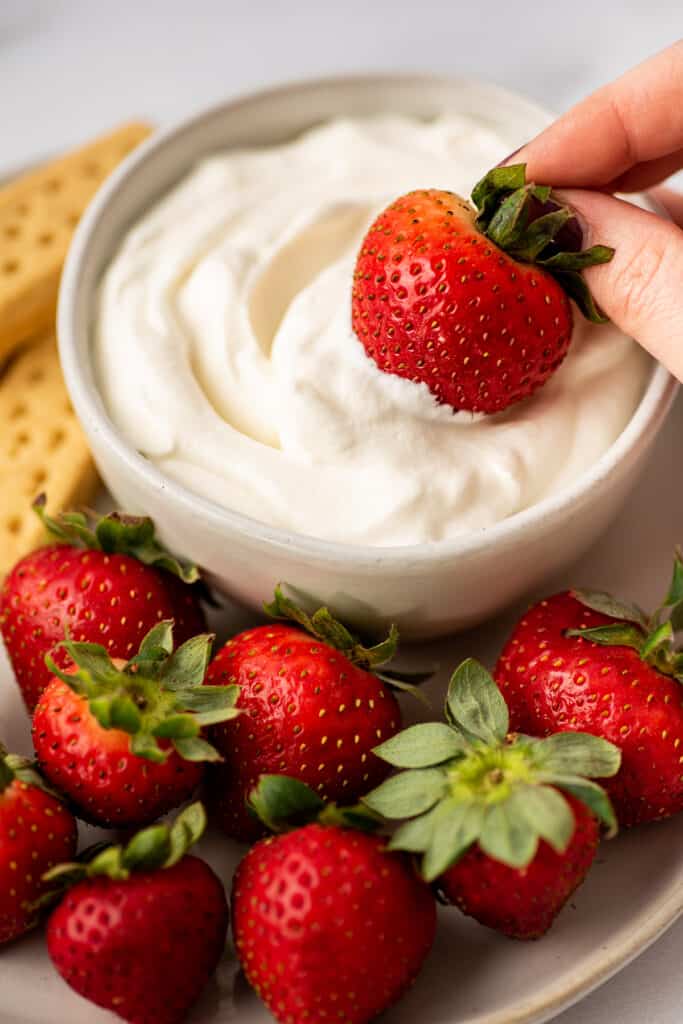 Recipes to Top With Whipped Cream 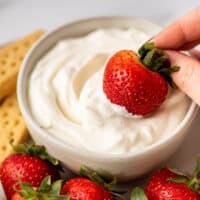 *Granulated sugar can be substituted for powdered sugar. If using granulated sugar, use 2 to 3 tablespoons or 1 to 1½ teaspoons for the small-batch version. *You will need to use a handheld electric mixer or a whisk and arm power to make a single serving because a stand mixer is unable to process an amount this small. This recipe will make approximately 2 cups of whipped cream. Approximate nutritional information is for a single serving of ¼ cup. Leftover whipped cream can be stored tightly covered in the refrigerator for up to 48 hours.
Did you make this recipe?I'd love to see it! Tag @BakingMischief or hashtag it #BakingMischief.