This incredibly good sausage potato soup is thick, cheesy, and decadent but so, so easy to make.

My ham and potato soup is one of Baking Mischief’s OG reader favorite recipes. You all are constantly sending me nice messages about that recipe, and it’s been pinned more than 180k times on Pinterest. So today, in the hopes of giving you another soup you might love, I present, cheesy sausage potato soup.

This is a spinoff version of that original fav made with smoked sausage and cheese, so it’s extra rich and creamy and stick-to-your-bones filling.

If you’re craving something warming and decadent tonight, I highly recommend that you give this soup a try. 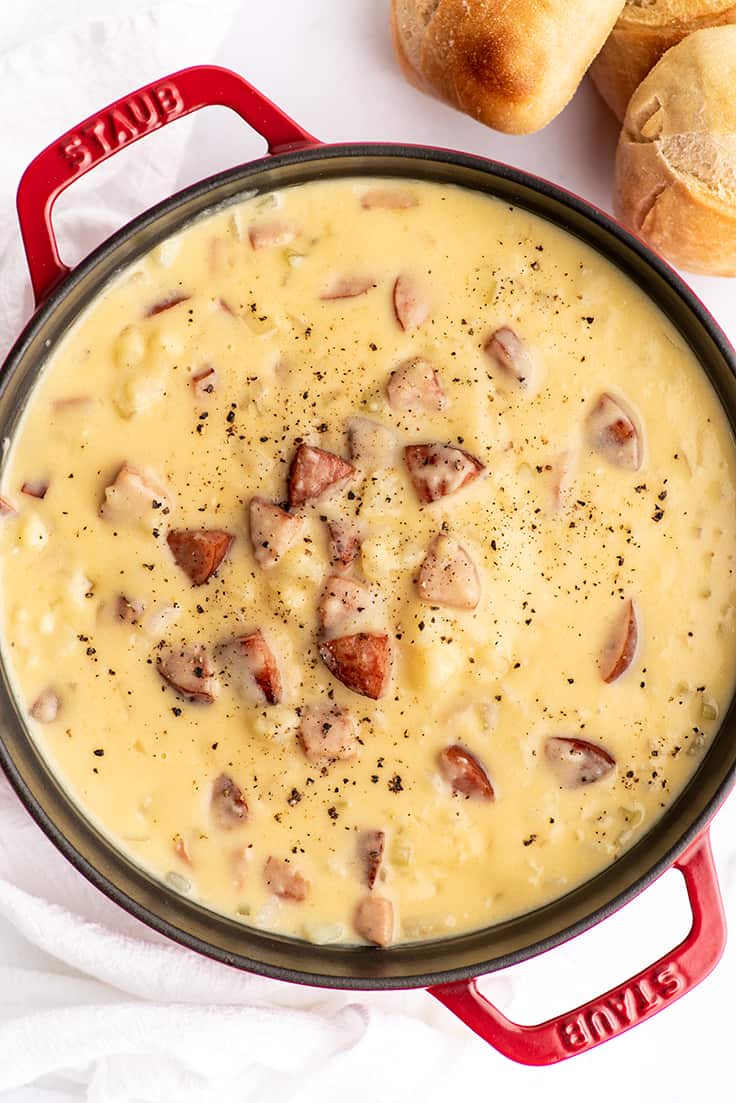 (Scroll to the recipe card for complete instructions and printable recipe.) 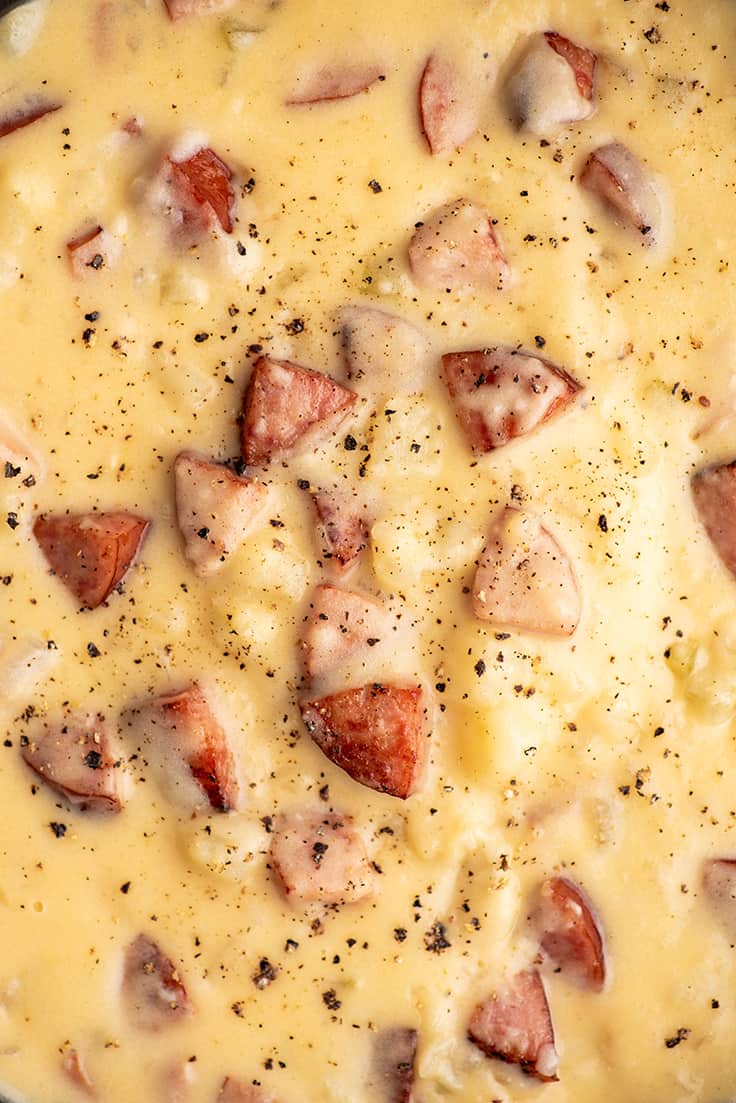 How to Make Sausage Potato Soup 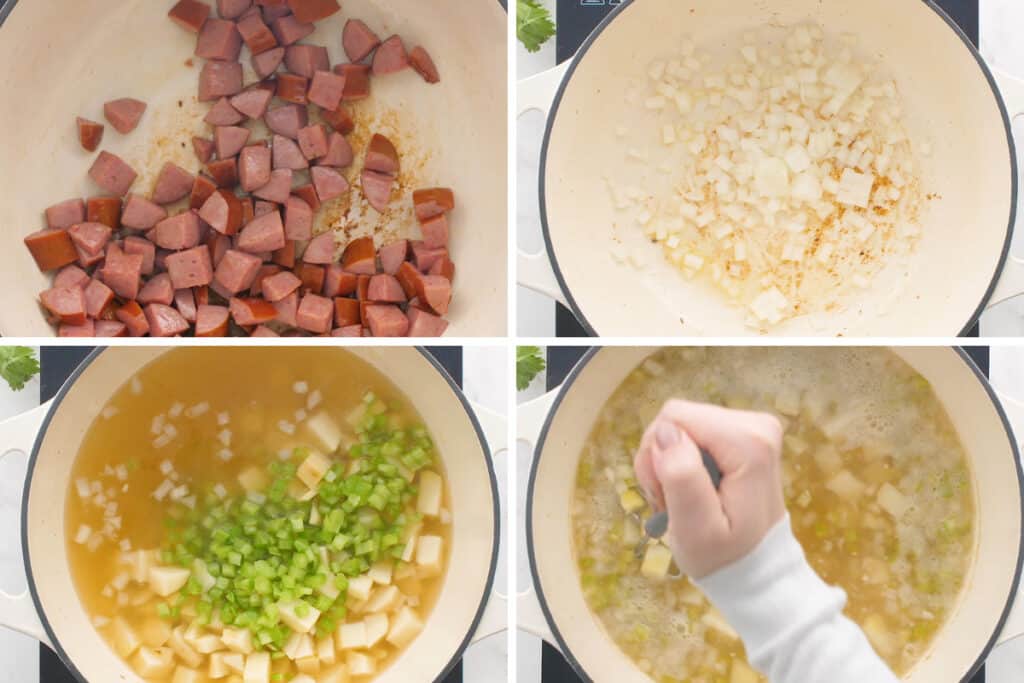 1. In a large Dutch oven or pot, lightly brown the diced sausage in olive oil. As tempting as it is to sear them really dark, don’t go overboard. You want the sausage somewhat tender, not crispy in the soup, and if the fond (the little cooked-on bits in the pot) turn too dark, it can add a burnt flavor and color to your soup. Once browned, use a slotted spoon to transfer the pieces to a bowl and set aside.

2. Add onions to the pan and cook until they just begin to turn translucent around the edges, and then add the garlic and cook until it’s golden and smells amazing.

3. Add the potatoes, celery, and chicken broth, and bring to a simmer. Cook for 10 to 15 minutes, until potatoes can be easily smashed against the side of the pot with a fork.

4. Using a potato masher or spatula, roughly smash about half of the potatoes in the pot. This will make a thicker, creamier soup while still leaving some pieces of potato for texture. 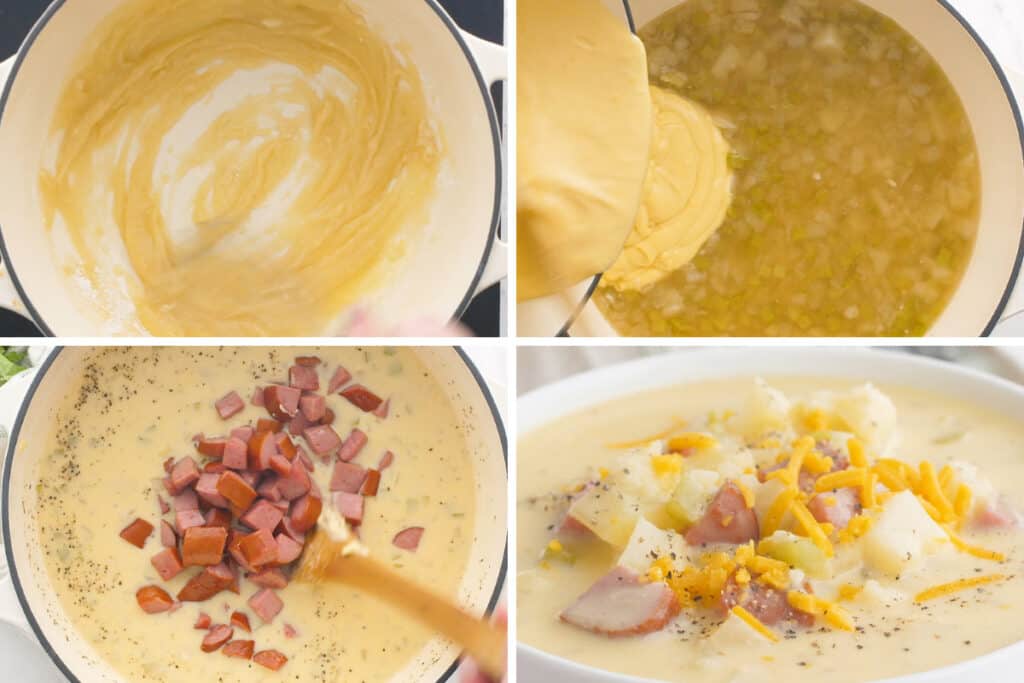 5. In a medium pot, melt butter and add flour. Cook until flour begins to turn lightly golden—this will cook the raw flour taste out of the roux.

6. Slowly drizzle in milk, whisking constantly as you go to whisk out any lumps. Cook, whisking continuously, until mixture is thickened and bubbly around the edges. Turn heat off, and slowly whisk in cheese, a handful at a time. Whisking the cheese in slowly, off the heat, will produce the smoothest sauce possible.

7. Once all your cheese is melted, stir the cheese sauce into the soup, add pepper and salt to taste (don’t skip this step!), and add the sausage back to the pot. Stir everything together, serve, and enjoy! 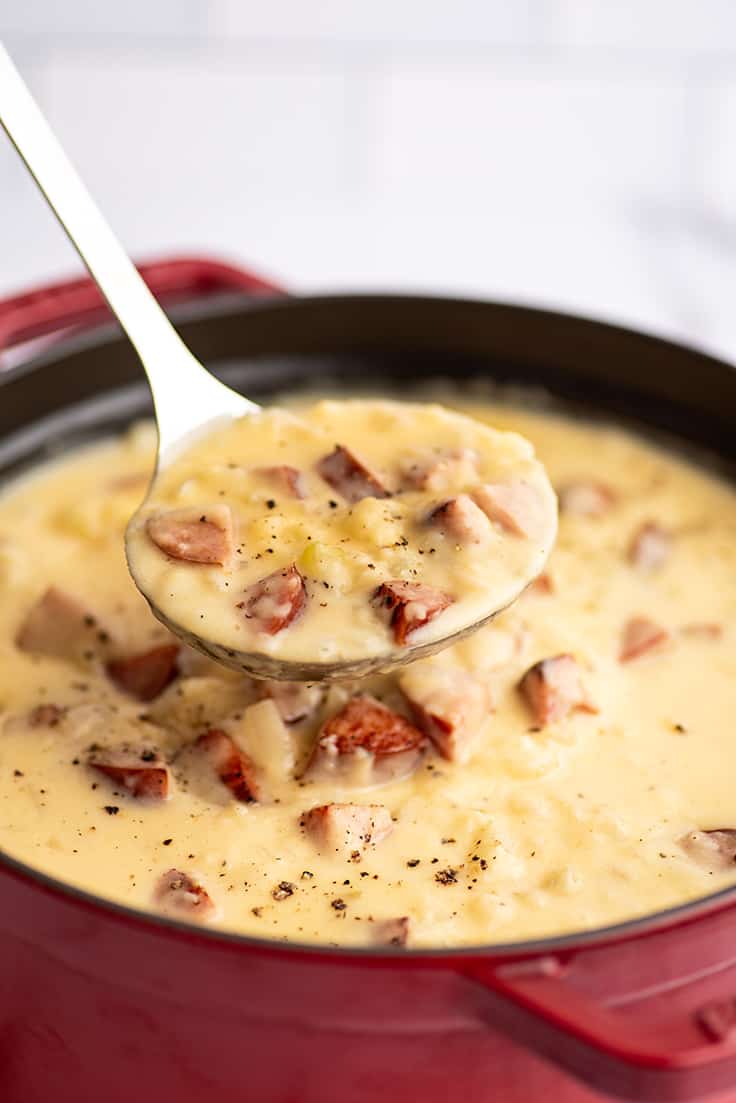 What to serve with sausage potato soup?

With a decadent soup like this, I like something light and simple on the side. Go with steamed or roasted vegetables like roasted broccoli or green beans and crusty bread for scooping the last bit of soup out of your bowl.

Can I freeze potato soup?

I don’t recommend freezing potato soup or any soup with potatoes in it, as potatoes don’t maintain their texture well when frozen and reheated. That being said, you *can* freeze this soup if you really want to. It’s not going to hurt anything, and some people really don’t mind the texture change.

To read more about freezing soup, check out my post How to Freeze Soup.

Can I prepare this soup in advance?

Yes! You can make this soup from start to finish up to 2 days in advance. It will be quite thick after refrigeration but rewarm gently on the stove and it will be creamy and beautiful again in no time. 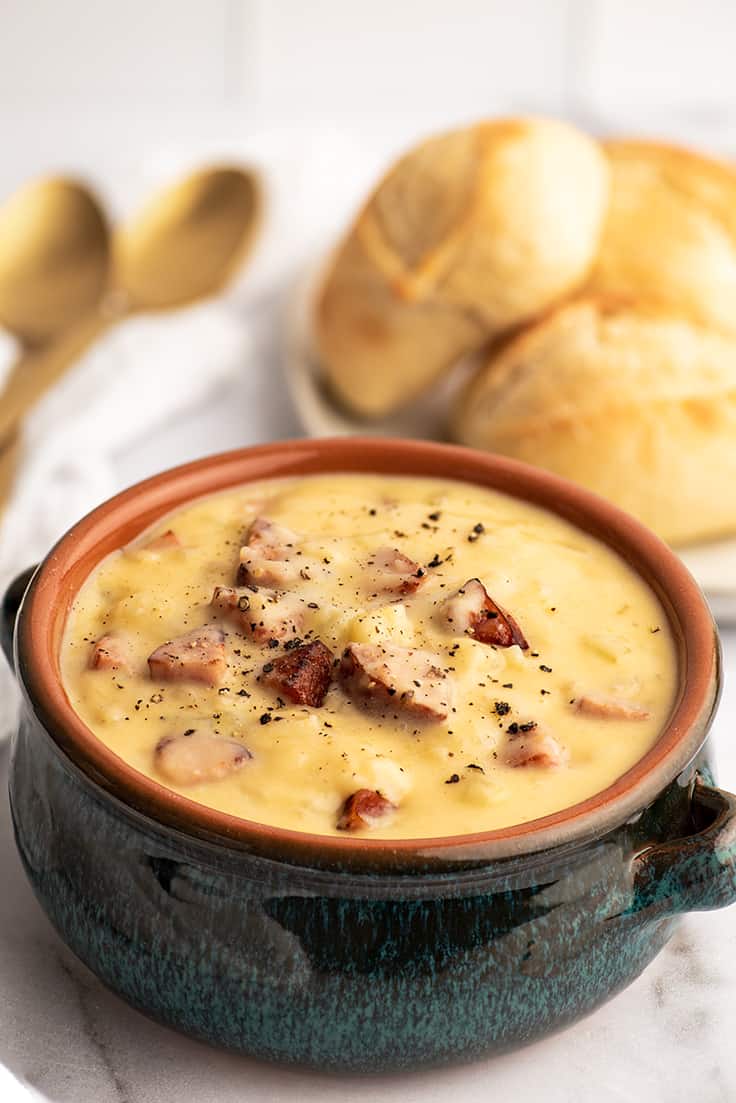 How can I make this soup healthier?

If you want to cut some calories, use chicken or turkey sausage instead of beef/pork, leave out the cheese, and use skim milk rather than whole. This will reduce the calories significantly. If you still want that cheesy flavor, you can sprinkle a little cheese over the top of each bowl when serving.

Can I use Italian sausage in this soup?

You can. If you’d like to use Italian sausage rather than smoked, cook the sausage all the way through at the beginning of the recipe and transfer it to a bowl. If the sausage has released a ton of grease, pour off (or use a paper towel) to absorb all but about a tablespoon of it, and then make the rest of the recipe as written. 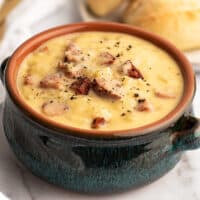 Approximate nutritional information is for 6 servings.
Did you make this recipe?I'd love to see it! Tag @BakingMischief or hashtag it #BakingMischief.